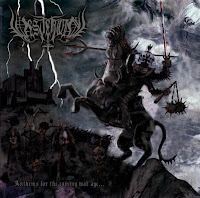 Hollywood is not the first place that comes to mind when I think of black metal, but having now listened through Vesterian's full-length debut Anthems for the Coming War Age, I have to say....fuck it! Let the streets of Tinseltown run red with blood, slay all the starlets and sequels and entertainment biz shysters who have reduced the once proud art of film making to its lowest common denominator status. That double flail and trident ought to do the trick. At any rate, despite this being the band's first proper album, they've been around for nearly two decades now, formerly known as Centurion on their earlier demos and then continuing to churn out material in that format through the later 90s and into the 21st century. Most of the members also have some experience in other, related underground acts from California, and the seasoned approach to classic black metal here really shines through.

Vesterian generates that same atmosphere and excitement I used to feel through the mid 90s when I was starved for releases from Emperor, Marduk, Satyricon, Old Man's Child, Dissection, and much of the extended Scandinavian scene. Fast, evil, unforgiving, and dependent heavily on the sinister repetition of some semi-dissonant chord progressions, potent blast beats, whipping, frenzied and frightening leads (like in "Morax Gates pt.2"), and wrathful barking and snarls. The tremolo picking that dominates the disc is pure hatred, and most of the compositions are pretty substantial, ranging from 6-10 minutes in length. This has a loud, straight to the face mix with the guitars and drums up front, but even though they're rare, the subtler atmospherics like synths or choirs are tastefully managed just to give the driving black metal some added level of texture or immediacy, as if to drown the listener in nocturnal panic. And this is total night music here, no sunshine or soothing sense of melody to reprieve you from its opaque finish, just straightaway black metal that seeks to connect with its audience not out of any purpose of innovation, but through a shared nostalgia. Even the promo pics of the band made me feel as if I'd just been shat back into 1995...

...and that's not necessarily a bad thing, now, is it? Admittedly, the full 61 minutes of Anthems for the Coming War Age can grow a fraction redundant and wouldn't have suffered from some trimming, but it's not as if Vesterian are just endlessly repeating individual riffs. The disc as a whole flows doesn't possess a wide range of variation, but there are slower moving bridges in there and nuances which generally prevent them from becoming a bore. I'd liken this to a number of the earlier Marduk records: you know what you're in for, and there's a lot of sameness in the speed, pacing, and riff structure, but you put it on for a reason and then just wallow in the infernal, incendiary rush. Otherwise, I can't say I have a lot of problems here...the vocal rasps are pretty standard, and don't have a lot of personality. The bass guitars, while in there, really tend to get clobbered by the rhythm guitars in the mix...though this was pretty much the practice for a lot of the records that inspired this one. But at the end of the day, when Anthems for the Coming War Age rises from its coffin, this is a tightly executed effort of classic black metal which has absolutely no delusions as to what it's on about, and that's to stab and bludgeon you repeatedly until the dawn.