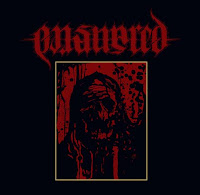 Ensnared is a Swedish death metal band, that thank fuck, doesn't sound in the slightest like a Swedish death metal band! They're not the first of such exceptions to the national aural scrawl of Entombed, Dismember and their late 80s/early 90s peers, but have instead come up with one of the closest aesthetic approximations to Altars of Madness I've actually heard. That's not to write them off as some direct ripoff, since there are like the filthy, rapacious Repulsion/Vincent hybrid vocals with a few cleaner, angry shouts, and the dissonant, black metal styled chords laden through tracks like opener "Adorations", but my first few plays through the Swede's EP jettisoned me directly back to 1989 when I was first blown away by Morbid Angel's initial onslaught, and the bands' faster, vicious, ripping riff sequences definitely recall those twisting, sinister scenarios fundamental to one of the greatest death metal records in history.

This is not, in general, slow, trendy, crawling cavern-core, but a band that lays on the malice through their dominant blast rhythms, threaded with zipping tremolo picked atrocities and slathered in disgusting vocals. Like the aforementioned Florida gods, they wear the thrash influence with pride and even mete out a few melodic, thrashy progressions in tunes like "With Roots Below". But as primal, ancient and fast paced as much of the EP seems, they're also not without a progressive, eclectic side. The roiling, arching bridge of "Adorations" with its great rhythm guitars and screaming, bluesy leads. Of the devastatingly excellent clean contrasts that inaugurate "The Hungry Darkness of Death", one of the best intros to a song I've heard in 2013; and if you listen to nothing else by this band, trust me, check the track out, since it offers a great intersection of all the band's stylistic choices, with some choice riffs and uncompromising, crashing savagery. A nice bonus here is the inclusion of two cuts from their 2011 demo, one of which ("Fields of Resurrection") sounds like it might have been a frenzied Altars of Madness outtake...

Anyway, if you're tired of the same old Sunlight guitar tones and seeking out something else ancient and authentic, this is probably for you. The rhythm guitars are harsh and grainy without entirely smearing out the listener's ability to perceive the notes, and the bass lines are busy and popping straight along with the same dextrous prowess. Drumming is natural and raw, somehow feeling like a louder skeletal frame for the vocals and guitars without obscuring them, and there are a lot of precision start/stops and hyper fills to maintain your attention on that performance alone. The songs aren't incredibly memorable like those of their influences, but even with the bonus cuts, this is a quick listen at 34 minutes and you come away feeling soiled, repulsed, and well schooled that death metal can still gets its ugly face on and jump out at you from the shadows. These guys might not be the most original or novel you'll hear, especially in a scene which includes Morbus Chron, Necrovation and Tribulation whose latest mutations are helping us to escape the endless Entombed doppelgangers, but the bestial aggression, endless abusive riffs and primacy of expression should place them into your radar if you're seeking out that 'other old school'.