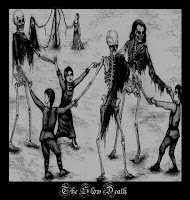 As if the name didn't give it away, The Slow Death is a death & doom metal project hailing from New South Wales, Australia, who are seeing their eponymous 2008 full-length debut reissued through Aurora Australis, probably the best doom-related label I've caught down under. From the cover art alone and band moniker, you'd probably expect this to be some righteously grim shit, but you'd actually be surprised that this is one of the more eloquent and graceful acts of its kind. In fact, they're one of the rare death/doom groups in the past 5 years that I'd actually consider 'catchy', due largely to the constant glaze of guitar melodies, succinct & memorable use of pianos and synthesizers, and the eerie, beautiful vocals of Mandy Andresen which set a nice contrast to the sustained death grunts of Gregg Williamson.

Of course, with tracks ranging from 12-18 minutes, you kind of have to hold the attention, and that's not always the case here. But to The Slow Death's credit, they generate enough versatility across the five songs and 70 minutes of content that no two really sound exactly the same, even if a number of the tunes could use a substantial edit down to their more interesting components. This isn't much of a problem on the 'shorter' pieces like "Grave" or "The Slow Death" itself, but certain I felt myself losing focus through "The Prodigal Sun" and the whopping finale "Dark Days". Drudging, low-tuned guitars are performed in the vein of old Paradise Lost, Anathema and My Dying Bride, with simplistic chord patterns that sound familiar but not entirely derivative; thankfully multi-instrumentalist Stuart Prickett (an Aussie underground veteran who also plays for the killer Backyard Mortuary) is steadily engaging us with loads of harmonies and melodies, some gently tapped and others phasing off into a distant, dying light, so there's not a lot of space here for the chord progressions to become dry.

Andresen's keyboards are hardly uncommon throughout the album, and usually fall under two sounds: a raw, orchestral pad as found in the bridge of "The Prodigal Son" or the intro to the band's namesake, or simple and elegant piano lines woven into the somber rhythm guitar progressions. On one hand, they tend to sound a bit cheesy, but at the same time they give the music a broader sense of scale and involvement than if they had just barebacked these tunes with the guitars alone. I can't speak so highly of the bass and drums, sadly, because the former is just not much of a presence through the album, and the latter are programmed. I'm generally of two minds when it comes to the practice: do they disappear into the background and do their job, or do they add some outside element or atmosphere (alien, industrialized, etc) that makes the music feel fresh. On a death/doom record of this caliber, they simply didn't fit for me, especially where the beats become more intense as the band picks up into a busier riffing sequence ("Dark Days"). They're not exactly a deal breaker here, and I've read that Prickett has corrected this issue on their sophomore with a real live drummer, but it would be dishonest to say they weren't somewhat of a distraction.

Otherwise, this is about 50 minutes of spot on, solemn and emotional escapism with about 20 minutes of overkill. I realize it's a 'thing' in this genre to swell up the songs beyond 10 minutes, but really, they need to either hit a climax (or several climaxes) or generate a hypnotic effect to succeed, and a few of these tracks definitely don't have that sort of structure that keeps you at the edge of your seat awaiting the next explosion of sorrow. Plenty of good riffs here, a tasteful dab of clean guitars, and both of the vocalists excel in their respective ranges, especially the layered, choral outro to "Dark Days", but are some segments I'd cut out of there. Lyrically, they manifest the usual Gothic-laden imagery of isolation, loss and regret, reminiscent of My Dying Bride, but there are some well-composed lines in there that show a sense of effort and seriousness (we're not talking Hooded Menace kitsch here). Ultimately, this was a decent album with solid hooks and respectable composition...it has its problems, but definitely made me wanna track down the sophomore to experience the changes. Recommended to fans of Draconian, 90s MDB, Isole, or anyone seeking a lighter, catchier alternative to that other Australian doom mainstay Mournful Congregation.