Nhor - Within the Darkness Between the Starlight (2013) 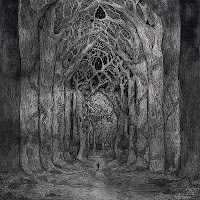 Within the Darkness Between the Starlight is a patient, meditative entry into a rich English black metal scene that is slowly, inevitably creeping its way up to international prominence. From the more folksy and culturally inspired works of Wodensthrone and Winterfylleth to the eclectic and literate A Forest of Stars, there's much happening on the isle of Great Britain, a recapture of rustic roots worth more than any commercial Medieval Faire. The musician Nhor approaches the genre from a different vector than such peers, like an accessible, more dynamic alternative to something like Switzerland's Paysage d'Hiver rather than a feral black metal riffing beats. Opaque, emotional and certainly in need of numerous listens to ingest, this third full-length is easily one of the most melancholic experiences I've had in the metal sphere this year.

Compositions range from maudlin piano pieces, to blasting, full-on, textured mournful black metal passages and then some drifting, ambient black-gaze components which develop a lush sense of obscured majesty. There is a tangible sense of distance here between the instruments, with the guitars and drums always howling and battering at you from a distance, while the pianos and roiling swells of ambiance are brighter and more whimsically confrontational. But, for a thing of such beauty, I really enjoyed how Nhor kept the bass lines and rhythm guitars ruddy and filthy, refusing to cleanse the recording of that essential underground grime that gives it a holistic depth. Vocals here are quite varied, from a central, suffering rasp to some keening, painful tones and soaring cleans that can run off the harsher bites. Riff structure isn't always highly unique, with some sloshing chords and vine-like tremolo picking, but it has a strangely hypnotic, anaesthetic and oft-droning substance that really impresses through the title track or "The Fall of Orion", sort of reminiscent of how Germans Endstille would build their strange rhythm guitars, only not in the context of such in-your-face, flesh-ripping black metal. I also appreciated how the loud and oozy bass lines, which you don't often hear so clearly in bands of a comparable, contemplative stature.

Lots of variation here, between longer and shorter cuts, but the dreary mood remains consistent even across the pure, scintillating piano melodies. Pacing in tracks like "Rohmet Etarnu" and "The Temple of Growth & Glimmer Ascends" is redolent of an atmospheric black/doom hybrid, with lazier, fill-strewn beats and fuzzy, repetitive guitars that serve as a bottomless tear-spring beneath the other instruments. I suppose to some extent this is the sort of stuff that makes you stare at your shoes on an autumn stroll; there's nothing brazen or fiery happening over nearly an hour of content, but I like that Nhor always incorporated just a faint hint of encroaching, threatening winter in the note choices, and it's never quite predictable beyond the enveloping sombre haze that never seems to dissipate. Ultimately effective, raw and gorgeous in equal measures, this is easily recommended to a large cross-section of fans who enjoy Velvet Cacoon, Alcest, Burzum, A Forest of Stars, Lifelover, Paysage d'Hiver, or anyone seeking a seasonal soundtrack for colder months. Just great stuff, really, and hopefully the signing to Prophecy Productions will get this out to a wider audience than the earlier records.