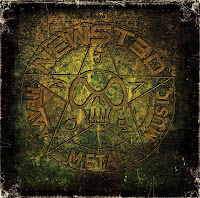 Because titling his previous EP Metal just wasn't enough, ex-Metallica bassist Jason Newsted confirms his faux-poignant, post midlife-crisis with Heavy Metal Music, the first full-length from his eponymous new career revival. I admit, the title is irritating as shit. I realize it's suppose to be this life-affirming, back-to-basics, obvious pronouncement, but really this has been done dozens of times before, and if you're not fucking doing this in the 80s, or your name is not Metalucifer, it just doesn't feel effective. Black Metal was cool in 1982, because it hinted at some dark and unknown possibilities. Heavy Metal Breakdown? Acceptable for when it was released. But Heavy Metal Music in 2013? Or that last, sorry 3 Inches of Blood record Long Live Heavy Metal? Enough already! We get it, Jason Newsted hasn't gone disco on us. This isn't Calypso Music. Thanks for making that distinction, now if you're through with the clever twaddle, how about writing some proper good songs? You were on ...And Justice for All and Voivod, for fuck's sake!

Now, one can probably deduce that I wasn't the biggest proponent for the Metal EP, which was forgotten about as quickly as it was listened to, but that's not to say I wasn't satisfied to hear Jason Newsted continue what he's good at. So often do these ex-members of leviathan rock acts peter off into a succession of silly, no-one-gives-a-damn solo outlets or collaborations with other sideliners, and despite his positive presence in Voivod (who have admittedly been writing better music than his alma mater Metallica since 1987), Jason Newsted hadn't really made much of a name for himself. I think with Heavy Metal Music this is likely to change, and Jasonic is likely to cultivate some hard-fought respect, because despite all odds, this is actually a solid, pumping set of tunes, a reconciliation for the lame duck title which is fully cognizant of Newsted's own history with the genre. Okay, there's not a lot of Flotsam & Jetsam influence here, but the best way to describe the tunes would be as the natural offspring of The Black Album and Voivod. Bangin', simple riffs supported by muscular bass lines, a mashup of traditional heavy metal and 80s thrash with a penchant for mammoth groove hooks redolent of Metallica's 'dumbing down' through the 90s.

Riffs this fat taste like a barely digested steak straining all of your bodily functions, but they'd only get the record so far if the vocals didn't also lend some character, and would you fuckin' know it, Jason sounds like a mix of James Hetfield and Alice Cooper, with a few hints of Snake's angrier inflections! He's a little monotonous, sure, and his lines are often hard to distinguish between various verses and songs, but he certainly earns the position; the marriage of stripped down riffs, bluesy Black Album leads and angry-assed vocals make this an excellent record for idealized bar room brawling in some backwater, while the grooves cultivate just enough of a stoner edge that fans of Black Label Society and Down might dig it, or anyone lamenting the fact that Corrosion of Conformity have partly ditched the stoner schtick to return to their (admittedly superior) hardcore roots. Another album I kept mentally referencing through this was Testament's very underrated 1992 effort The Ritual, which thrived off a similar sense of regression to the base principles of its genre, and wound up my favorite in their entire catalog. Heavy Metal Music makes damn sure that it's as uncomplicated as possible, relying on the layman hooks and vitriol-spun vocals to soak themselves into the Neanderthal shards of the brain. Want technical riffing? Extreme metal drumming? Seek them elsewhere.

Now, granted, there are a few middling tracks here (like the handful drafted over from the EP), and more than a few riffs that pass in one ear and straight out the other, but on the whole there's no question that Newsted rocks more often than it doesn't. Surprisingly, this is not album that relies on guest celebrities to promote itself, but sticks very closely to its knuckle-dusting, whiskey-drowned personality. Mike Mushok is an exception, having joined the project after the Metal EP, but anyone familiar with Staind, one of those deplorable heavy rock acts my state shat forth in the 90s alongside Godsmack, the gift that keeps on giving (I apologize on behalf of all Massholes), will be relieved that he cocks absolutely nothing up here, but lays into the big rhythms with enthusiasm and fits seamlessly into the Newsted master plan. Jason's bass lines, while thick as sin, are also unexpected in that they don't seem to 'take over' the compositions, something they came dangerously close to doing on Voivod. As for the drums, they're versatile and well performed, but as I mentioned earlier, this is not the province of much extremity or experimentation. Standard rock beats and fills, but Mendez hits hard and nothing else really would have worked on these tunes.

Heavy Metal Music does live up to its name in that its a celebration of the form, cross-pollinating riffing schematics from 70s metal (Sabbath, Priest, Purple) to 80s hard hair rock (Crue, Ratt), NWOBHM and just that hint of something thrashier (Metallica, Metal Church). So as much as I dislike the title, I gladly chew my own foot this time; but don't be misled into thinking that this is necessarily 'amazing', or by any mean's a year's end contender. It's got problems: the vocals need more range. The leads are a little banal. It wouldn't kill the writing if the rhythm guitar riffs were a hint busier, or the bass lines more interesting. 2-3 of the weaker tunes could be slashed ("King of the Underdogs" and "Soldierhead", at least). But at the end of the day, Heavy Metal Music is fairly fun to listen through, especially for the long-term metal aficionado whose tastes bleed across numerous sub-genre borders, and it at least shows some effort in defining this band's trajectory for the future. If I had to compare it to Death Magnetic, I might give the latter a slight edge, but sure as shit this is better than fuckin' Lulu. I just hope the next one's not called Angry Music or Rock Music or Heavy Metal Hornblowers or Captain Fucking Obvious.