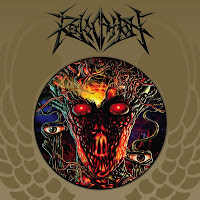 It's no secret that I harbored very high hopes for Revocation these past years: an astounding local live act with talented musicians making it to the next level for once, instead of the trendier type of band usually generated in New England. Unfortunately, their eponymous fourth album just reeks of burnout; not that it's void of a handful of compelling ideas and at a few points more creative than its predecessor Chaos of Forms, but there is clearly an evolutionary standstill with many of the rhythm guitars, which draw upon standard schemata of modern West Coast thrash, technical death and melodic 90s Swedish death, place them into a blender and sprinkle liberally with jerky techniques often associated with mathcore or metalcore bands like The Red Chord or Dillinger Escape Plan.

The result is their least impressive album to date, if not in terms of 'intense activity' then in sheer quality, with a slew of tunes flying frenetically towards the realm of forgettable. From the lazy title, to the negative space on the cover, to the music itself, it's painfully difficult to get excited. A handful of 'wow, that's neat' moments and then on with my day. The chief issue I'm having is with the vocals, a complaint I've lodged over the rest of their works which clearly is in no danger of being addressed. David Davidson is hands down one of the best guitar players in the Boston area, so tight and technically proficient that it makes others want to give up in shame; it's doubly impressive that he sings and plays simultaneously. But his barking is little more than a bland post-Anselmo metalcore bark with next to no variation or emotional resonance. Music this plotted and potentially devastating deserves a nastier inflection with some character, but every time he starts spitting out lyrics it's guaranteed to suffocate the riffing beneath. It was an issue with the prior works, but here, as the band reaches its most manic pacing, my lack of interest in this style of growl has 'come to a head'.

It might not even be a matter of finding someone new, but just fix the grainy, dry production, snarl with a little more reverb. With more charisma. There's a reason I could remember many of Hetfield of Schmier's lines instantaneously, but can't recall Dave's raving five minutes later. At best you're going to get some layered gutturals and snarls (like in "Fracked") but these still seem like I could pick up a random metalcore/deathcore record of the past decade and possibly find better. They need to be at LEAST as good as Vektor's. Beyond that, some of the 'mathy' riffing definitely seems like the product of a creative osmosis as the band have toured with a number of high profile hardcore or metalcore acts. There's not necessarily anything wrong with that, or with Revocation attempting to grow itself in multiple directions, but it felt a little distracting when I'm engaged in some highly technical, surgical death/thrash riffing and then it suddenly sounds like Ben Weinman or Kurt Ballou has hijacked the song. To be fair, these moments are a minority, but I guess I was just more impressed when the band was writing a more straight-up mesh of 80s thrash and seminal tech death influences on Existence is Futile. The lead sequences on this album are without question its strongest, generally supported by appropriate and exciting rhythm guitar riffs that are better than most of the verses.

These gripes aside, Revocation is not a record without some moments of incendiary bliss. Rhythms guitars in verses are more involved and (occasionally) engaging than your average rethrash throwback, because they are drawing from a wider palette of influences. Melodic tremolo runs, grooves, dystopian structures that can recount anything from SYL to Darkane...these guys aren't just farting out tunes over a single week, a lot of effort goes into the placement and diversification, a wealth of ideas playful and punishing. But that doesn't make them great songwriters, because the myriad riffs just aren't consistent in quality. Every song on the album has SOMETHING good in there, but you have to weed through a lot of average, non-compelling progressions to arrive ("Entombed by Wealth", "A Visitation" or "The Gift You Gave" in which they go all Amon Amarth-sounding in the chorus being prime examples). The commitment to variation is laudable, and like past efforts they don't shy away from cleaner guitars or jazzy Cynic-like explorations, but it really does seem that the chaff could have been cut off the wheat here, and Revocation rendered down to about 30 minutes of excellence rather than 52 of meandering.

I already mentioned the pratfalls of the vocal production, but otherwise this record sounds up to speed with their last few, without a lot of sparkle outside of the leads. The rhythm guitars have a lot of punch to them, mandatory when they're hitting the mid-stride grooves or the djent-like hammering ("Spastic"). You can almost always make out the new bassist Brett Bamberg, whose bouncy Blacky-meets-DiGiorgio tone fills in for the departed Anthony Buda quite sufficiently. Phil is just as sick and effective as ever before, maybe not considered an 'A-lister' in extreme metal drumming but he can fucking play anything regardless. There's a bit of a digital machine gunning presence to the fills, but the kicks roll along like brickwork, and he can match each shift in tempo with ease. Ultimately, I think I'd just prefer a 'remix' of this same album with about 10-15 minutes of fat trimmed off, and better vocals. The combination of flashy guitar work over a fusion of styles thrashing, deathly, whatever-core and progressive will undoubtedly dazzle a generation of listeners reared on anything from Vektor to djent, but the songs aren't as distinct as Existence is Futile. Not a bad album, despite the issues I had, but Revocation will have to trawl harder for its inevitable(?) masterpiece.