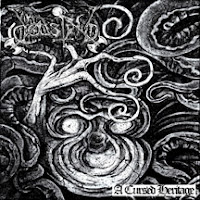 Wrath is apparently on a roll lately, so it was interesting to compare and contrast both of Dodferd's 2013 records. A Cursed Heritage might be considered the more 'proper' release, coming out through Moribund Records (like most of the previous full-lengths), whereas the other, A Breed of Parasite was perhaps the more 'experimental'. Then again, the lines become blurred a little, because this is actually the shorter of the two records (30 minutes), and like its sorrowful sibling, features a pair of ambient cuts, wedged here into the latter half of the run time. But, for the most part, this is the sort of scathing and incendiary black metal to the face that might have been slightly missing from Parasites, and it justifies itself by blasting your skin off, while suffering no dearth of atmosphere.

A Cursed Heritage begins with what I believe to be a sample from The Name of the Rose film adaptation, with some haunted howling, fuzzed bass, driving blast and bright chords that immediately give the record a sense of contrast between enlightenment and savagery. From there, the intensity really never lets up until the bridge of the third song. The entire album feels higher pitched and less murky than its counterpart, and the vocals also offer some deviation, with Wrath delivering a cleaner, painful tone in amongst the wretched rasp you would expect. The riff choice isn't all that unusual, notation fixed upon glorious bursts of tremolo picked chords, but for instance "In the Ground of Your Beseeching" is strangely uplifting despite going seven minutes without much rhythmic variation, and "As the Light Revealed His Wound" is just a belter of a motherfucking black metal song which should disintegrate any fairies listening within about 30 seconds. That pumping post- Darkthrone rock & roll riff at around 2:00 just kicks whatever teeth you have left in, and the 'breakdowns' are equally amazing in execution, with the double bass section and then the rhythm section dropping out while the guitar sizzles.

I also really enjoyed the brief "Disposable Human Wastes", blasted clinical primacy which transforms into this shimmering wall of angst with weird little clips of either bass or muted guitar plucking, I can barely tell because it's just so fast. At under 80 seconds, this was a succinct and interesting way to deliver a black metal song, and while normally I would want 'more', it actually felt like a complete idea. On the other hand, the two ambient cuts ("Drowned in Silence" and "Deserted") are sadly nowhere near as compelling as those found on A Breed of Parasites. The finale ("Deserted") in particular, sparse guitar ambiance, is rather a bore and doesn't add much to the proceedings. But at least for about the first 20-25 minutes, A Cursed Heritage beats the shit out of the listener more than probably any other Dodsferd record I've heard (and I've heard a lot of them), and provides a substantial aesthetic balance to the other disc...it's not about being 'prolific' so much as organizing ideas into appropriate environs to create a cohesive listen.

Which do I prefer? Well, apart from the fact that "As the Light Revealed His Wound" is probably the most rancid and effective whiff of Hell-breath this group has exuded upon the underground, and numerous other tunes do impress, I was feeling A Breed of Parasites for its greater sense of immersion and varied but effective consistency. The last cut on this one is entirely unnecessary and would have been better replaced by another onslaught, since Parasites had the experimentation phase more than covered. But I have to say, I was overall more impressed with Dodsferd's output this year than ever in the past, and for the first time I am actually looking forward to whatever they might mete out next. They might not be writing on that same level of crafted neo-Scandinavian symphonic complexity as countrymen like Spectral Lore and Acherontas, and they might not harbor the traditional Hellenic uniqueness of their forebears Rotting Christ or Necromantia, but clearly Wrath is starting to excel with this lineup he put together around 2011, and bringing something rotten and respectable to the table.