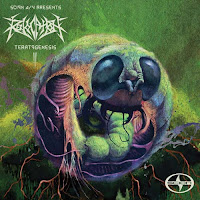 In lieu of dwelling on my lukewarm reaction to Revocation's latest, eponymous full-length, I went back to check out last year's Scion A/V freebie Teratogenesis, a 5-track EP that presumably showcased some of the Mass band's best work, according to what I've read. What is it about this A/V format that brings out such good in those who choose to use it? Just about every one of these short-players I've listened through has been money: Enslaved, Immolation, Wormrot, and sure enough, this band from my own backyard delivers on their own offering. What instantly appealed to me about the five tracks here was the tighter sense of songwriting scale, reliant on strong and memorable riffing structures moreso than trying to knock over the listener with the band's prowess and cluttered, claustrophobic riff patterns. These tunes don't bite off more than the band can chew, and apart from my usual disinterest in the vocals, there are at least two songs here which I'd gladly number among the best in their full body of work.

"The Grip Tightens" is one such case, an onslaught of melodic and catchy riffing which bridges the band's US thrash influences with their Swedish melodeath counterparts. One of the guitar progressions here pre-chorus is a bit generic and predictable, but once they hit the mood of that chorus it's even easy to forgive Davidson's barking, which to be fair is stronger and NASTIER sounding here than on several of their full-length efforts. They've even got a breakdown in there for all you At the Gates/Black Dahlia Murder fans, and as usual the lead sequence is extremely well dispensed. Another contender is "Maniacally Unleashed" a slightly tech thrashing beast in which the opening notes just pop into you like a scalpel, and then it picks up into an even more intense piece with blasting, wailing micro-solos and a great bridge. The riffs here are note-for-note superior to anything off their latest album (Revocation s/t), though I didn't love the vocals. I wasn't as convinced with the other tracks, but "Spurn the Outstretched Hand" and "Bound by Desire" were at least as solid as much of the material on Chaos of Forms; the latter bordering on a tech black/death hybrid with lots of blasting and tremolo melodies (but not exemplary for the style).

Production here is comparable to the records sandwiching it, pretty dry and effective without a lot of effects saucing up the guitars where unnecessary. This was also a nice place to introduce new bassist Bramberger, who does run rampant at a few opportunities, but often falls behind some of the rhythm guitars in "Spurt the Outstretched Hand" or "The Grip Tightens" to the degree that you forget he's even there. Drums are intense and admittedly, Dave's vocals are about half on fire and half their debilitating selves (so much less compelling than the music that they can seem obstructive). The few, cleaner, backing lines add a nice, numbing effect to the choruses without lapsing into shitty mallcore like Killswitch Engage. Lyrics remind me of Immolation or Suffocation, political in scope but packed with a few instances of death metal grandeur and gore, a bit hard to chew when you realize these are East Coasters who probably get breakfast at Dunkin' Donuts (or your local equivalent). But, hey, suspension of disbelief, right? Teratogenesis is pretty damn solid, and you cannot beat the price. Nothing amazing, but a great way to 'sample' the band, and if you like this you'll want to track down their sophomore Existence is Futile with haste.