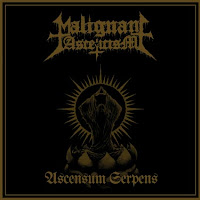 10 minutes of black metal is rarely enough to build a strong or negative impression of a particular black metal band, but nonetheless that is the format of Malignant Asceticism's first official label release, a limited press EP. This is a Chilean act with a pair of self-issued cassette demos behind them, and a few members hailing from an equally obscure death metal act Putrid Skill, but Ascensum Serpens this is my own first run in with their music, and I came away with a fairly average reaction to the tracks. Not particularly unique or inspiring, but if there's one thing I did enjoy it was their commitment to tempering the traditional aesthetics of the genre with a creepier, atmospheric element that plays out in both the guitars and vocals.

This is far more the case with the song "Seventh Breath", which features some cycled chanting over the thick, roiling guitars in the opening, and then some nasty, dissonant tremolo picking which they relish with some cleaner, backing repetitions that give you the sense you're in some cult horror flick about to 'discover' that you're right fucked. Otherwise, this is pretty basic, caustic black metal with a lot of emphasis on the guitar tone and bass, the former of which is filthy and unrelenting, the latter a bit louder than usual though it only stands out beneath a few of the chord changes. Vocals are nihilistic layers of barks and snarls that have a good sustain/echo to them, though the louder growl is somewhat monotonous and doesn't develop a lot of personality to compete with the more wretched sounding guitar. On the other hand, the drums possess a very real and raw aggression, with rich bucket kicks during the blast sequences and some storming, slashing cymbals. The foot speed is pretty solid and they go for a more sincere, live percussive atmosphere than being picked over excessively in the studio.

The other track, "The Black Dance" isn't quite as compelling as "Seventh Breath", but it has more of a straight, chord driven charge accompanied by blast beats that started off reminding me of classic records like De Mysteriis dom Sathanas or Transilvanian Hunger with a fraction of faintly hidden melody and then a dense, spacious, bridge segment with droning tremolo guitars that took it all to left field where it became a little more interesting, and then built a consistency with "Seventh Breath" in terms of the obscure ground the Chileans seek to cover. But apart from its few sinister, atmospheric flourishes, I can't really claim that the songs really stood out to me. Perhaps because there's just not enough here to get lost in, or that the choices of chords weren't infectiously interesting. They do honor to the 'malignant' in their moniker, because there is potential here for some really eerie, threatening material, and they're far from incompetent, but I didn't get a lot of replay value out of these particular tunes. So other than collectors seeking out limited issue occult black metal records, this could be a 'wait for the full length' situation.