Oshiego - The Great Architect of Nothing (2013) 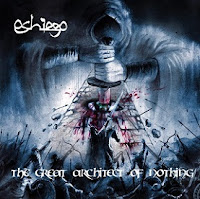 Singapore's Oshiego has straddled the border between death and thrash metal for years now, never fully committing to either field, so it's no surprise that their sophomore album The Great Architect of Nothing continues this practice. Granted, thanks to the vocals here, the emphasis is slightly stronger on the former genre than the latter, but there are still plenty enough palm-muted breaks moving at a late 80s moshing clip to generate that age-old headbanging excitement which never really grows tired. More importantly, they season in a lot of techniques here that reveal a broader array of influences than even the last album, and thus there's this constant sense of surprise and unpredictability to this disc which helps maintain a listener's attention span. I'm not saying it's stuffed to the gills with memorable riffs or timeless songwriting, but there's a fire and enthusiasm about the band that feels fresh, even where derivative. Varied yet consistent, brutal in a simplistic way.

The trio will entreat the audience to churning tremolo picked rhythms that hearken back to the age of records like Death's Scream Bloody Gore and Leprosy, yet they also incorporate a lot of squeals and sweeps and other techniques that are associated more with the turn towards technical brutality that death metal took in the 90s. Minimalistic, chugging mid-paced thrash riffs are used in both the verse rhythms and breakdowns, and it helps a lot that the guitars have this bludgeoning, deep production about them felt propelled largely through the mutes, but really I'm just happy that, no matter how basic the patterns feel, they aren't repeated endlessly unto metalcore boredom. There are brief flashes of exciting leads throughout, without much of a structure or sense of indulgence, and I wouldn't have minded more extensive soloing or an added depth of melody to offset the gut-busting low end that dominates the disc, but they do occur uncommonly. As for the pacing throughout, it's very evenly distributed through medium and faster material, diverse riffing architecture that does help distinguish a number of individual tracks without breaking the sum flow and flexibility of the record. The drums are a little boxy in the mix, and the bass doesn't always have a potent presence (though you can hear a few decent fills or grooves down there), but the blasting and fills are pretty intense and the percussive effect of the rhythm section is indeed tight.

I do really, really enjoy the vocalist here, Umar Khan. He's got a great, ghastly depth to his delivery that brings back memories of a Martin van Drunen, if a little more 'brutal' and not quite so charismatic. Snarls and additional growls are occasionally used to add some zest to his performance, but none are required, for even if the guy doesn't have a lot of range or tricks, the guttural just doesn't get old, and I was totally feeling some nostalgia for the later 80s/early 90s when most front men in this field were quite distinguishable from one another. It's not just your run-of-the-mill droning delivery you get out of a lot of faceless modern death, but something more intestine-twisting and sincere. I was also a little surprised by the forceful grind aesthetics or d-beat death metal/hardcore open chord riffing that occasionally reared its head through the album, a pretty nice balance against the more morbid aesthetic of the tremolo and muted picking progressions. In the end, this shows a 'refinement' of Oshiego's sound, without abandoning that death/thrash crossover that gave them life. The cover of Vomitory's "The Voyage" (from their 1999 sophomore Redemption) was a nice addition, not only because they play it tightly, but because they do a lot to blend it in with their own material rather than just adopting the straight up Swedification of the original.

The Great Architect of Nothing isn't strikingly sticky or mind-blowing, and I still think the leads could be tweaked to provide a more memorable higher end over the rhythmic beatdown, but it's got this sense of concussive confidence about it, sure to result in neck-strain, and definitely a more enjoyable set of tunes than Woe to the Conquered. Definitely one to check out for fans of early Pestilence, Asphyx, Assorted Heap, Cancer, Protector, and more recently an Intestine Baalism or Deadly Spawn, though the material isn't quite so infectiously as melodic as Baalism. Honest death/thrash with no fear of diversification.