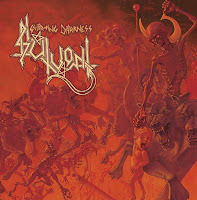 I came across Slutvomit's Turning the Cross Towards Hell EP a few years back, and while that mightn't have been anything to get the panties in a bunch over, it was the sort of filthy and impetuous blackened speed or thrash metal that I tend to favor for its ideals of looseness and vileness; a cruel visage that automatically helps drive home a set of derivative 80s based riffs and ideas that might otherwise be easily ignored. The material there wasn't on the same level, as, say Antichrist's Forbidden World, a stunning and unforgettable gem of a record which simultaneously placed its chest nuts in the fires of the past and present, with a set of insidious, blazing riffs and disgustingly effective vocals that have yet to leave my car stereo...but considering that most of the bands I fancy in this style are decidedly European, it was refreshing that we had Slutvomit sitting out in the Northwest and pitchforking themselves with potential...a potential that is certainly realized on their Invictus Productions debut.

Swarming Darkness has pretty much everything I need in my dirty vest-slinging speed-death thrashing black madness. Nasty and lecherous vocals with a nice resonant echo that recollects the proto-Teutonic hostility of bands like Kreator and Sodom. Fast riffing patterns that, while obviously reformed and rearranged from an array of classic records circa Slayer, Possessed, etc, still come across as driven and incendiary, with no shortage of effort in their execution. Warped leads that add an otherworldly, underworldly aesthetic of flair to the more workmanlike speed of the rhythm tracks, and take the whole experience to a level above the mere median of metallic efficiency. Drumming consistency that sounds like the guy's seat is on fire, with plenty of kick strength, fills and yet still a cohesion to the classic, punishing styles of a Hoglan or Lombardo. And last but not least, a clear but not obscene polished production which provides for the little inconsistencies or flaws that give a metal record some actual character. Swarming Darkness did not disappoint me on any of these levels, and though much of the content was already available on their previous demo and EP, its all splayed out here with a level production and impish, charismatic glee.

To be honest, much of the album plays out with an uncomfortable level of sameness that might have been better served with a broader array of riffing variation, but that's not to say that they don't insert a few more mid-paced breakdowns. Some of these instances (like in the titular opening cut itself) definitely seem to take their cues rather closely from classic cuts found on records like Kreator's Pleasure to Kill, and quite a number of tunes have similar speed-picked patterns that vary only in a few chord selections or note intervals. The song titles themselves seem like they've just been paraphrased from their influences ("Bombing the Chapel", etc) and the respective songs aesthetically close to those influences, but it's not like this is a niche brimming with originality...pretty much all of the international acts in this category are recycling Slayer, Kreator, Destruction, Possessed, Bathory and their ilk into hellish breaths of inspiration, and mileage will vary on how they stick the evolved leads, choruses, and rhythm guitars into the listener's memory. I found that Slutvomit has just enough of this to remain intense throughout, in particular on the more substantial tracks like "Morbid Priest (of Hell)" or "Harbinger of Doom" where they really go off the hinges and burn the audience to cinders. Swarming Darkness is perhaps not the equal of Forbidden World, or Aura Noir, or Germany's Nocturnal, but its entertaining enough to start a drunken riot of horn throwing and bottle smashing on whatever native plane of the Abyss you call home. Hail...*hiccup* Satan!