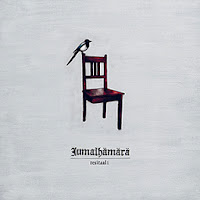 When intoning Jumalhämärä's name aloud in ignorant English, it really sounds like something you might step in and/or get stuck in. Amusingly, that could not be a more fitting comparison for the Finns' unorthodox, unexpected twist on the conservative black metal formulae that they obviously took a left turn from some time ago. But even having been apprised of the band's tactics on their excellent 2010 full-length Resignaatio, I would not have been prepared for the shocking turn they've taken on their latest material. For, you see, Resitaali is not even remotely metallic by any definition of the...alright, the harmonium pump organ on which it was performed does involve some metal components, but this represents a reduction of aesthetics, a spiritual departure and a minimalist stamp of experimentation that seems left field even taking into account how bizarre the Finns had come across on the older releases...

There's not a lot involved here in terms of compositional complexity or challenge, and thus there's not a lot to say other than this is the sort of recording anyone who has visited a church service in the past 200 years can likely relate to. This isn't some grandiose orchestration of pipe organ, but the tones emitted capture a similar sense of smooth consistency and manifestation of immediate nostalgia. Having personally been pressured by family to attend a Protestant church/Sunday School until my early teens, at which point I proudly, defiantly rejected Confirmation and marched home in my denim Hell Awaits vest through the rain, even I felt the solemn stir of memory here. Of being seated in lacquered wooden pews, listening to the timbres woven through the organ that would herald the oncoming service and score the hymnals. Truth be told, the actual setting and soundtrack to that chapter in my life were never the problem. I think they were both beautiful, generating an atavistic bond between myself and my largely religious ancestors...I just never personally approved or agreed with the message. But ultimately, what I'm saying here is that Jumalhämärä are generating that gorgeous, steady seriousness of the instrument without the requisite piety and boredom.

To be fair, some might view this as an unnecessary source of ennui, but those individuals will largely fall under the category of those that don't share this fond sense of recollection. Unlike Burzum's latest ambient piece Sôl austan, Mâni vestan, a disappointingly dull spin on 80s New Age minimalism, Resitaali seems to draw itself from a richer tapestry of interlocking humanity. I reviewed this from the cassette promo sent to me through Ahdistuksen Aihio Productions, rather than the digital files, which I promptly popped into this old Sylvania radio/tape/record player combo; lit a pair of candles and just studied the slow flicker of the flames while I absorbed the four tracks and 35 minutes. There is some degree of variation in how each is set up, with some sequences proving more desolate, barren and monotonous than others which seem to scale through the vaulted ceilings of the perceived worship-place that might have inspired it. I was actually quite surprised to hear the instrument sink into the more brooding, dissonant construction of track "III", but it did wonders to help establish the wider mood, a broader sojourn for the listener's emotional response.

There are limitations, obviously. Jumalhämärä haven't added any cinematic string sections of dubstep drops (hey, there's an idea?!?) to spice this up. This is a devotional to an instrument we rarely here out of its normal cultural context, and the unusual percussion and creepy black metal aesthetics are entirely vacant. In general there will be one strong harmony persisting through a piece, while tinier melodies drift off peripherally, until the more solemn, single 'chord' sequences that resonate unto dust and nothingness. Within these limitations, though, Resitaali is ultimately successful because, despite the lack of multiple instruments, new and often unexpected patterns do arise over the four tunes. Don't get me wrong: this is 100%, meditative mood music. If you're not into organs, this is unlikely to change your mind. I doubt it would function as a score to your weekend Civil War Reenactment or BMX Rally (actually, strike those, it might ironically work just as well in either situation), but if you set up the proper cerebral controls, this is a sublime, environmental work which actually feels like a complete journey, with a proper beginning and end and very little maudlin meandering throughout. Even the cover is pretty fascinating: why the bird? And why does the chair have only three legs? I may never know, but the sounds of this organ ensure that I want to.