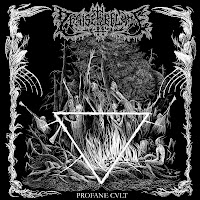 Praise the Flame is another in the trifecta of Chilean bands, including Malignant Asceticism and Horrifying, to see a vinyl issue through Blood Harvest records of Sweden; and of the three discs, I'd have to say this was also my clear favorite. This was put out earlier this year through Apocalyptic Productions, native to the South American scene, but entirely slipped past my attention. Lethal, incendiary old school blackened/thrashing death metal which took me back to the Brazilian and German scenes in the wake of the first few Slayer LPs. Recalling everything from ancient Kreator and Sodom recordings to a bit of the oldest Sepultura, Profane Cult is delivered with this brazen, monstrous production which really drives home its sinister, unforgiving speed.

I have to say I love the structure of the original EP, expertly bookended with a haunting, warped choral intro ("Perpetual Covenant") and a noisy/spectacle "Outro" smothered in distortion and freakish acid synthesizer tones. Nestled into this experimentation are four blazing originals that seemed like they just escaped a Hellish prison camp together, waiting for the demonic chain-gang supervisor to look the other way and then fording a river of magma back to the world of the living, dragging their molten manacles all the way! The fast picked, richly toned tremolo guitars simply burn the listener through exposure, and they vary up riffing progressions plenty and then cut into them with wild, frivolous leads and squeals while the one constant is the sustained, bloody guttural vocal which just fucking howls over the calamitous intensity and speed. I'm not saying that a lot of the writing here is terribly original, but it sounds so fiery and fresh and unforgiving that it's hard not to think of this as a South American/Teutonic rebirth of what made all those bands sound so evil in the first place.

The drumming is great and really contributes to the chaos with belligerently absurd blast beats that burst out straight into a snappy-paced thrash pattern; though some of it can get a little confusing with the constantly warping rhythm patterns. Bass is fast and choppy but you can certainly make it out when you concentrate, and hear the fills and grooves being applied to the rhythmic razors. Lots of riffs here that will make fans of black/thrash cults like Ketzer, Cruel Force, Antichrist, Nocturnal and Witchtrap happy without being too close in execution. There's also a bonus here in addition to the original EP material; a well rendered, nasty cover of "Before the Creation of Time" via Sweden's Unleashed. Not actually the first thing I'd expect them to include, you figure they'd go the safe route and do something from early Bathory, Venom or more appropriately Hell Awaits, but they pull it off without clashing too much with their own writing. The 12" also has revamped cover artwork (superior to the original). Not the most thematically original style, perhaps, and not note-for-note perfect, but Praise the Flame's raucous energy and infernal effort really sell this stuff. Much fun for the leather, spikes, and Satan crowd.