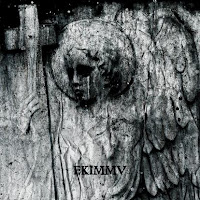 With three tracks eclipsing 15 minutes each, one of which nears the 23 minute mark, EKIMMV is an album that demands a large degree of patience and contemplation from the listener. It's a demand that I'm not sure is consistently warranted, for while there are some pleasant and engrossing riffing progressions throughout, and the sole musician behind Lamentations of the Ashen, Bon Vincent Fry, is adept enough at building layers of tension and sadness through a mixture of fell snarls, atmospheric tremolo picking and subtle bass contours, these behemoth compositions seem to drift, drift, and drift some more through a series of overt, patchwork transitions. So, the earnest attempts to imbue them with highly necessary variation tends to meander, never quite achieve a climactic payoff, and only a handful of the rhythm guitar patterns really stick.

Interestingly, the wordy song titles like "Eventide Sentinels Bedecked with Ineffable Twilight" and "Viperine Shades Linger Quiescent Among Erstwhile Passions", while lovely, seem to really set up the expectations that this is going to be quite indulgent and channel a Romantic, poetic sensibility which I feel it definitely does accomplish. This is clearly true of the lyrics, which have a classicist sense of wonder in capturing their imagery which dial back centuries. The rhythm guitar structures are largely rooted in tremolo picking sequences, which encapsulate an antiquated, Gothic longing rather than the sinister despotism I generally equate with much of the black metal genre. This is statuary black metal, regal and lonely and meant to elate the listener's spirit to a state of soaring and sadness, not to repeatedly prod the audience with aural pitchforks, and I don't believe anyone seeking out such an aesthetic would be ultimately disappointed with what Fry concocts here. He also doesn't shy away from anything: understated, atmospheric synth pads implemented sparingly across the course of the record. Samples in numerous languages. Solemn, ambient drops within the meat of the metallic content. Or cleaner, sparkling guitar passages that could be just at home in an alt rock context as this. Predictable this is not, but at the same time the pieces seemed to be wedged into the puzzle at random.

Where I find no faults at all would be the production, which is impressively clean, and even without losing the emotional depths of each instrument. Guitars are bright enough to cut right into the imagination, but gain a little power and traction when blossoming into denser chord patterns. The drums sound live and fresh, with an effortless capacity to handle the variety of beats through lumbering kicks and steady snare strikes, not to mention there are some experimental percussion sections as you'll hear in "Viperine Shades..." that might take you by surprise. The bass is pretty bleak and smooth, often just wallowing along in the wake of the guitar but always somehow managing to add another tonal tier to the experience. Fry's rasping is nothing necessarily out of the ordinary, but he generates enough of a nasty sustain that it fits the mood of the music rather well, even if there are few individual lines that I might consider gripping or interesting. Most impressive are the subtle nuances, sounds you'll hear on the edge of perception that are constantly woven in and out of the music; even if they're just synth or feedback, they often generated a compelling, panoramic effect. I'll also note that Patrick A. Hasson of Black Chalice lends his clean, haunting vocals to the track "Veiled in Clairaudient Litany" which felt like it veered into a minimalistic Dead Can Dance territory before picking back up with the guitars.

Ultimately, though, I found myself struggling to retain interest the more journeys I made through this. For one, the 5 minute instrumental intro, "...of Wraiths in White", which is essentially a piano leading into some glaring feedback and then a few droning notes, seemed the driest and least worthwhile piece on the whole album, and might just have been left off. The outro, "Ascent into the Empyrean", built on angelic synth choirs, also seems a fraction cheesy and not living up to its potential. As weighted and swollen as the three primary tunes are, they're far less irritating and decked out with generally more interesting ideas. Just not always configured into the most climactic or emotionally resonant progressions, so I often had to dig around to find a few truly inspirational moments. That said, EKIMMV's conflagration of components does feel somewhat if not entirely original, and fans of dreamier, spacious bedroom/basement black metal which doesn't adhere to any specific set of rules might find this a journey worth experiencing.