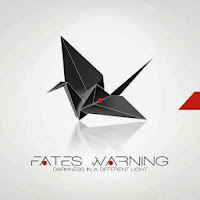 With a 3D origami graphic that seems taken straight from some forgotten prog rock record of decades past, it becomes immediately apparent that the Fates Warning revival, after nearly a decade of studio absence, will not be yanking upon their early 80s trad/power metal roots, but instead dialing to a point later in that decade where they transformed into their more subtle, progressive phase which produced a streak of fine records in Perfect Symmetry, Parallels, and Inside Out, before wearing itself thin with the lazier, inexpressive, weaker songwriting that characterized the three later full-lengths which led up to the hiatus. Or at least, that is what I hoped when I was gazing upon the packaging of Darkness in a Different Light, and fortunately I wound up rewarded with what came across to me like an amalgamation of the mechanical nuance of Perfect Symmetry/Parallels with the cleaner, modernized production punch of Fates Warning X.

Yes, a truly throwback Fates Warning record is not and will likely never be in the cards, but with the advent of the Arch/Matheos collaboration that's no longer really a necessity. While that excellent debut, Sympathetic Resonance had a more contemporary appeal than The Specter Within and Awaken the Guardian, it was close enough in feel to satisfy the nostalgia, and potentially leave us two avenues with which to answer our cravings. What I really wanted out of Darkness in a Different Light was another Perfect Symmetry, a slightly dark, prescient and melodic piece with memorable songwriting that could endure for decades. This isn't nearly on that level, I'm afraid, but certainly exceeds the mediocrity that defined the group's 1997-2004 phase. The sole loss to the previous lineup, drummer Mark Zonder, has returned to his alma mater Warlord and produced a comeback of its own in The Holy Empire (in fact a better album than this); but here he is replaced with Bobby Jarzombek, a player with superior technical ability that could play on almost any recording under the sun. Not to discredit Zonder, whose simple and steady performance was a great match for Fates' aesthetic transition in the late 80s, but just the presence of Bobby alone hints at a more energized, exciting selection of tracks...

...which is, to an extent, an accurate depiction of Darkness in a Different Light. There is unquestionably a sense of revitalization and commitment to the material, perhaps spurred on by Matheos' success with the John Arch collaboration. Fates Warning seems hungry again, and though mechanically there is little here which seems a 'progression' beyond anything they released through the 90s, there is a greater focus on the core strengths of riffing, pacing and melody that kept them near the pinnacle of the niche back in their prime. The songs here will not so much haunt or impress anyone to the point that they'll be hummed on subway trains or in cubicles, but they achieve a median between the gentler emotional moments of their past balladry, and the stolid post-Rush grooves characteristic of Fates Warning X, Disconnected or Alder's other bands Engine and Redemption. Though Jarzombek's drumming is clear and away the most complex and harried component of the music, I like that they've brought back some fairly well developed chorus building in cuts like "One Thousand Fires" and "Into the Black". Though there are a lot of thicker 'boogie' grooves that dominate the harder end of the record, I like that several of the rhythm guitars had a tone and phrasing straight off Perfect Symmetry.

Alder's not exactly taxing himself, and he hasn't for many years now, but his presence certainly carries much of the material with a wealth of subtler dramatic shifts and smooth, sustained intonations (as in "Kneel and Obey"). The guy's not spitting out catchy line after line, but he's also not repeating himself ad nauseum with the boredom I've experienced on other albums, and he really works to contrast the start/stop nature of the grooves in pieces like "O Chloroform". Clean, feely, processed guitars are still pretty common, but there's an appreciable array of metallic riffing that spans from the later 80s material, when progressive metal in general felt more exotic, to the marginal nu- and groove- metal stuff that had started to infect the band in the 90s, but nothing feels cheap or redundant. The leads are definitely cut from a wilder, flashy hard rock cloth in tunes like "Into the Black", but they're not exactly memorable. I also have to say that I'm just not too impressed with the bass lines. Joey Vera is normally fantastic but they seem to subsumed by the rhythm guitars, even though his tone is crystal clear. As unusual as it seems, Alder and Jarzombek are the stars here; most of the guitars serve only as a seat for the vocalizations, and not a lot are interesting independently.

It wouldn't be possible for me to listen through this without consciously comparing it to the latest works of the two other American prog metal bigwigs, and I think it shares that same earnest vivacity for steering the band back to a point at which it truly mattered. Dream Theater might have pulled it off a little better on their eponymous disc, but I enjoyed it more than the most recent by Queensrÿche proper. And yet there's still a sense of a band working hard to where it needs to be, but not entirely succeeding. Darkness in a Different Light is engaging enough where it counts, when you're actually sitting there with the music in your speakers or headphones, but it's very difficult to imagine caring about it a month from now, much less when you're in the mood for one of their classics. If I compare this to any of their first 6-7 albums, whether in the Arch or Alder camp, it falls short in terms of songwriting and overall aesthetic quality. Clearly the time off has aged the band well, and I don't mean to be too down on this, it's a solid record; but I do hope this can prove the groundwork for a record like Perfect Symmetry where most of the songs resonate well beyond their years, despite being well ahead of their original birth date.