The Fateful Hour - An Everlasting Silence (2013) 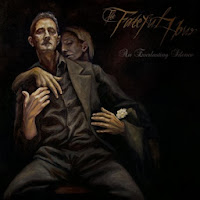 The doom metal I receive here at the blog generally comes in one of two categories: the acid-washed psychedelic sludge that has recently been popularized well beyond the parameters of the genre's core audience, and the crushing death/doom variety which depends so heavily on its own suffocating sense of bleakness and depression. Massachusetts' newcomers The Fateful Hour, while probably closer in theme and aural aesthetics to that latter category, do not handily fit into the mold of any trending sound, instead tracing their lineage back to the turn of the century works of groups like Anathema, Heavenwood, My Dying Bride, Paradise Lost, Katatonia, Novembers Doom and their ilk. A mournful, melodic but accessible vessel helmed by a mixture of expressive gutturals and numbing cleans. While it's not perfectly consistent in its capacity for sticky songwriting, I definitely came away from the experience feeling as if I've just heard something classy which resonates with a comparable timelessness to the stronger output of those acts I listed above.

I think the decision here to keep the songs reined in to reasonable durations (generally around 5 minutes) helped a great deal in driving home a concise sense of beauty and sorrow. An Everlasting Silence does not succumb to superfluous 9-10 minute bouts of outright, repetitive tedium, but instead generates a sensible rise and fall of riffing and emotion that fails to wear out its welcome. Solitary melodies, or joint harmonies all tend to make a lot of sense and scrape along the gray skyline of the music's mood, and their sheer simplicity does discern nostalgia for those prominent 90s influences. The percussion lurches with a ponderous confidence, big and sparse beats that are traditional to the form, with plenty of slower double bass sequences and a nice pop on the snare and thunder to the toms. The bass is equally supportive to the highly melodic focus of the rhythm guitars, but it's got a nice robust tone and plenty of small fills that create their own tangential depth. There is also no shying away from the use of synthesizers here, which are never so brazen to take over the mix of instruments, and eschew the overbearing symphonic mockery to actually sound like a keyboard that serves as a crucial rhythmic instrument, another arch of melody which joins the guitars in the stratosphere of the album's range.

Rather than the usual, dry and monotonous growl you expect out of any Gothic/death/doom record, Ben Fortier actually delivers a grimier inflection which seems more genuine thanks to its own natural flaws and inconsistencies. He doesn't sound like someone who wants to be suffering, 'because it's, like, a doom band', but rather someone that IS in some degree of pain, and contrasted with the simpler, numbing clean vocals that haunt the landscape of An Everlasting Silence, there seems to be an authenticity which is missing in a lot of the European, orchestrated acts with the tacky female choirs/frontpersons who seem to be there for a paycheck and a photo shoot rather than to share their woes upon the audience. Lyrically, An Everlasting Silence is deeply personal and not at all uplifting, and again I'm drawn back to Anathema, Paradise Lost and that British scene which so championed this sound before it was hijacked by Katatonia and their more driving sense of melancholy and melodic structure. Ultimately, this is an album for fans of those gloomy, glimmering late 90s/early 00's works and their modern day disciples (Swallow the Sun, Daylight Dies, the recent October Tide output, etc).

Some pundits for the style might find it a little short, and more of an EP or mini-album than a proper full-length, but this wasn't a matter of much concern for me, since I find a lot of material in this niche to be pretentious and inflated beyond repair. Not to mention, this is a self-released debut, a wetting of the feet. I wouldn't say that many of the melodies here were particularly everlasting in that I'd find myself humming or whistling them on the commute the next morning. Dissonance is largely a foreign concept here but might actually have given the songwriting even more of a tidal sense of depression. It's not an Icon, or The Silent Enigma, or a Brave Murder Day...but nonetheless, this is tasteful, well-formed melodic doom metal which is wise never to bore the listener to tears, instead relying on its own, mournful essence to generate that same, salty result.