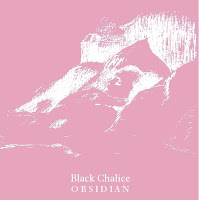 What hit me the hardest about Obsidian is just how abrupt the album begins, especially for a death/doom record. No lengthy, pretentious acoustic passages to kick off the experience, no treacherously slow build into the solemn and crushing riffs. This one just dumps a bucket of sorrow directly over your noggin through a miasma of churning, burly doom metal progressions, haunting and tonal clean vocals that hover below the loud swell of the chords, and a foundation of dreamy atmospherics that seem as if they could only been inspired by a dreary, overcast New England coastline. Or at least that's how I'll imagine it, since Black Chalice is the work of one Patrick A. Hasson of Maine, who some underground pundits might recognize from his black metal oriented projects Auspicium and Avulse.

But even more important, this album got me nostalgic for what must be my favorite doom metal epoch, the 90s, when the strong presence of the British scene was joined by an emergent Swedish wave of Gothic-tinted bands. For instance, some of the emboldened chord patterns here recall the first two Lake of Tears records, but then Patrick is constantly splaying out resonant melodies beneath them that remind me of Paradise Lost (circa Icon). Granted, this is marginally more solemn and funereal in disposition than those albums, to the point that it might even appeal to fans of stuff like Evoken, but this guy clearly dug out the roots of the genre and avoids the droning, endless excess that the style has often fallen into, even on the longer pieces "Heliocentric" and "Obsidian" that make up about 21 minutes of content between them. Some might balk at the stiffness of the drum programming, or the oft calamitous resonance of the production in general, but this tape is nothing if not consistently eloquent and oppressive in equal turns.

Naturally, he gives himself more space to explore in the wider tunes, like "Obsidian" where the drums drop to a sparse cadence, the drudging bass-lines rumble beneath a glaze of harmonies; or "Heliocentric" where he produces these warm, climactic fusions of the grainy rhythm guitars and melodies. But most of the material is based on the same, steady formula of dirty chords and drifting vocals. The singing is strangely subdued, and this might also prove a turnoff for those accustomed to the vocals being on top, but in reality this just gives them the substance of another instrument in the mix. He doesn't exclusively stick with this one style, capable of belting out the dirgelike gutturals most equate with the genre, but it certainly feels more drugged, numbing and ultimately unique. I did feel at times like the album might have benefited from further variation, perhaps some vocal-only passages or tempo shifts, but as it stands, four tracks in 33 minutes isn't quite enough to wear out its welcome by turning the same few tricks repeatedly.

All in all, a fairly unique style here that rewarded me with the escapism I seek of it. The lyrics are personal and cautionary as opposed to poetic and image-heavy; dealing largely with depression, alcoholism and the confines of the human condition, but at the same time their humble. Patrick isn't speaking to you through some pretentious haze of Gothic grandeur, but more on a person-to-person level, and it helps to ground the epic quality of the music, to 'reel it in' if you will. You know, I just had to make a fisherman joke because I'm an asshole, and because there's just something so contemplatively coastal about this...lighthouse doom...a walk on the rocks, breakers spraying your toes with cold, salty tears. Obsidian isn't perfection by any means, but it IS an experience, and there's not a lot more I could ask for in a niche of metal that I sometimes find to be the antithesis of compelling. Recommended for your next gray afternoon.