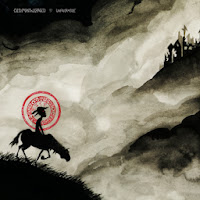 What is it with the West Coast producing these distinctive mash-ups of psychedelic/prog rock, folk and traditional metal? First we had Slough Feg and Hammers of Misforture blowing minds out of Frisco, and if Unfavorable is any indicator, Old Man Wizard of San Diego should follow suit through their memorable fusion of 60s/70s songwriting skills and proto-metal chops. The six cuts comprising the debut album reveal glimpses of anything from Rainbow, Cream, Beatles, Tull, or Floyd to the last Opeth record Heritage or the recent works of those aforementioned Californian acts, and all enveloped in a rich palette of clean, modern sound that screams 'here and now', regardless of the nostalgia the group has obviously weaned its sound upon.

Smooth, melodious vocals that range from driven harmonies to shrill, distant wails; all set adrift over a wide array of natural guitar tone and pluggy, voluminous bass-lines and shufflin' beats that thrive off one another in true power trio fashion. The rhythm guitar has just that faint trace of fuzz and potency which dates it to the dawn of metal or hard rock in general, eschewing the saturation of intense distortion for that warmer tone. And yet there is no tradeoff in terms of complexity: no, Old Man Wizard is not some technical/progressive act by any means, but the harder hitting riffs and grooves retain an intricacy you're not going to find out of the Deep Purple cover band at your local watering hole. They're not just bland, pentatonic blues overdrive, but cultivate the structure of a lot of old metal, turn of the 80s NWOBHM licks. The pacing of Unfavorable is also paramount to its success: moody pieces like "Travellers' Lament" weave in dreamy but cautionary acoustic guitars, while others like "Nightmare Rider" mete out edgier, darker riffs that create a median between Sabbath and Rush, and the guitar harmonies in "The Bearded Fool" recollect Thin Lizzy. The lyrics capture a rustic, fantastical 'tell it from the mountain' vibe, seamless alongside the musical aesthetic.

All this would be impressive in of itself, but meaningless if the tunes weren't so damned catchy, and truth be told there was not a single vocal line over the album that was anything less than pleasant or compelling. Nor can I think of a guitar line that failed to titillate, or to provide that level of escapism you can feel just by glaring at the cover artwork. The songwriting could hardly be considered 'wild', but suitably unpredictable in that the diction of tempos and note progressions was never something I could be certain of in advance, and at roughly a half hour there's plenty of variety with obviously no shot at growing bored with itself. Granted, certain psychedelic rock fans might find it a bit brief, but the purpose here is to really test the waters and showcase the considerable songwriting chops, which this does quite favorably. You see what I did there. That is why I'm not a comedian, folks. At any rate, despite Old Man Wizard's handle, and the obvious cultural backlog of sounds they're developing into the 21st century, not once did I feel any gray hairs poking through my scalp. Fresh, rejuvenated, imaginative rock and roll for the lit. The unlit. The soul seeker and the atavist. Perfect it isn't, but it confidently lays the first bricks along that road.