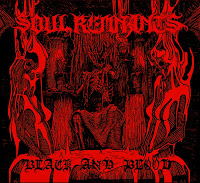 Another bulwark in a strengthening Massachusetts death metal scene which includes Abnormality, Scalpel, Sexcrement and Zealotry, Soul Remnants actually have quite a lot of collective scene experience behind them already, and in a number of styles. Reading through the roster, you'll find guys who have played either live or in studio with locals ranging from the more decidedly brutal extreme of Deconformity and Burial to the more melodic ministrations of Frozen and The Year of Our Lord, not to mention some power and black metal projects. I won't profess to being a fan of many of those acts, but there's no argument that the variation and diversity of sounds there bleeds through into a really well-produced, well-balanced onslaught of systematically intense death metal with elements of grind and technical thrash that span a broad array of influences.

Seriously, all bets are off with what you're going to find buried in some of these songs. For instance, "Dead Black (Heart of Ice)" has a charging melodic black metal surge at its center, while other tunes like "No Afterlife" have these exciting, death/thrash picking progressions redolent of bands like Carcass and Death. It would be a little difficult to corner Soul Remnants into any particular theme or style, and that's not such a bad thing, but if there were some core aesthetic at play, it's probably the sort of explosive, blasting 90s and turn of the century death and grind pioneered by Napalm Death, Malevolent Creation, Morbid Angel, and Hate Eternal. There's a lot of intricacy here, no shortage of riffing patterns being spewed forth at any given point on the album, and the excellent, clear production ensures that you experience all of it. Rich and churning, thrashy palm mutes occupy the lower end of the writing, but they often move at an extremely fast clip with more precise, technical riffing techniques from tremolo picking to clinical hyper-thrash. Thankfully they're not above committing themselves to some slower sequences that prevent this from becoming some monotonous, unswerving ballistic missile.

That's not to say that I loved the material, because while they're masters at throttling the listener with a billion solid riffs, approximately none of them are the sort that will really stick out in your thoughts a half hour after you've listened through them. Soul Remnants generates a precarious balance between the old and new, with ripping, thought out solos, a rhythm section tighter than a damned noose, and no shortage of melodies to offset the sheer hostility (like the bridge in "No Afterlife"). Lots to ingest across numerous listens, and there is enough sum technicality through the four players that this could almost rival another of our Boston heroes, the successful and deserving Revocation. But even after combing through this record a half-dozen times, and appreciating just how much effort this took to put together, I couldn't shake the feeling that a lot of the constituent riffing patterns felt like hollower, less inspired representations of their individual forebears. Like a gestalt of material from Necroticism, Individual Thought Patterns, Conquering the Throne and a dozen other hallmarks of extremity that never really surpasses any of them despite its broader variation.

I also really wasn't into the vocals, not for any lack of trying, because this guy has a raucous and loud guttural which fits the songwriting like a glove; but because it's just not the most charismatic growl out there, and I might not be able to pick it out from a lineup if I didn't have the cover art of the promo staring at me. They'll weave in some multi-tracked snarls and growls, and truth be told he can shift effortlessly between a more rasped timbre and an even deeper bludgeoning roar, but beyond the 'all purpose' sort of delivery they just don't distinguish themselves. Granted, this is a pretty common symptom of death metal in the now, and this guy is by no means incompetent, since he's able to match the exciting pace of the music; but there's really nothing sinister or exemplary about the performance. In fact, few of the riffs or songs really match any of the evil and menacing impressions left upon me by a lot of the records that influenced this. It's exciting but not very interesting. That's a tall order, I realize, but with a few thousand death metal records coming out each year, it's something I personally seek out.

In the end, Black and Blood was an album I spent mostly digging the great sound, the flawless exaction of the drummer, and just the sheer wealth (if not memorable quality) of riffing, in particular the bridges where the rhythm guitars build in intensity to support the flight of the leads. There is absolutely no laziness or half assedness anywhere. No one is slumming. You don't arrive at a result like this without each individual contributing his share and more, and I wouldn't be surprised at all that a younger audience trapped between their generational love of brickwalled tech death/deathcore and an emergent desire to explore the older school roots of the genre that have become so popular anew will devour this like candy. Certainly, Soul Remnants is not pursuing some clamorous cavern-core trend or biting off the Swedish tone that arrives in my mailbox 75 times each month, and that says a lot for them. This set of songs might not have connected with me personally, beyond their visceral and frenetic qualities, but with this much raw proficiency in the lineup, they will no doubt appeal to many fans of the vintage extremity of Morbid Angel, Cryptopsy, Suffocation, Malevolent Creation, Deicide, and so forth.