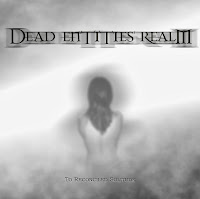 To Reconciled Solitude is an album I might never have even heard were it not for remaining so persistent in my writing through the years, because otherwise who would have given a damn about sharing it with me? One of the perks of being so obsessive. I owe myself a drink! But, all self congratulations aside, Dead Entities' Realm is one of those off the radar, independently produced works that likely deserves much more than it's ever gotten. An intensive labor of love, written and performed by a pair of talented Germans, with a refreshing take on progressive death metal. Not entirely unfamiliar, perhaps, and there are a handful of minor production gaffes which might turn off a few listeners with very particular tastes in death metal recording, but this is honestly superior in sound to a fair number of the more professional label-released albums I encounter, and you can't fake this level of proficiency...

It's also pretty difficult to pigeonhole the sound, because while I might point out traces here of old school masters like Death themselves (post-Human), which becomes readily apparent in some of the more clinical melodic picking passages, I also drew comparisons to another German band, Disillusion, whose debut Back to Times of Splendor left similar impressions. And there are of course overt hints of modern, harmonic Scandinavian death metal circa Sweden or Finland, though the rhythmic support is often more stolid and brutal, without the usual enthusiastic triplets and noodling you'd expect of the classic C.O.B., In Flames and Dark Tranquillity material. To Reconciled Solitude is plotted and paced rather well, with a number of intros and interludes that involve cleaner guitar passages and pianos that create a welcome contrast against the harder hitting rhythms. Generally when a band incorporates such techniques often enough, they run the risk of 'playing the Opeth card', but there wasn't one instance here of meandering, superfluous songwriting: all the choices make sense, the songs actually go somewhere, and at worst they're inflated out to about a six minute mark, which the duo are more than capable of filling with interesting riffs and tempos.

Guitars range from bright to bludgeoning as mandated by either the reliance upon strong melodies or the denser, death/thrash riffing cycles that the Germans spend just as much time with. Few if any instances of sameness occur through the 34 minutes, and while not every individual string of notes screams incredibly memorable, it's all so well conceived that the listener's interest is consistently maintained. There's no sense of 'filler' or phoned in composition, all of the eight tracks seem equally immediate and distinct, even if I did not personally connect with every melody to the point that it took up permanent residency in my brain. The bass playing flows with an enormous level of confidence, even if the lines and fills aren't always so distinct from the busier guitars, it does its job admirable. As for the drum programming, while this is liable to prove the biggest turnoff to a number of listeners, I rarely found it intrusive beyond a few machine-like snares or cymbals...in fact the beats seemed to be synced up with just as much thought as many an actual drummer might have given them. Certainly not distracting enough to diminish the emotional resonance of the songs, but I've always felt that this music is better served with a live percussionist.

The gutturals here don't exhibit a large breadth of range, but they're adequate and functional, a more concise and mildly higher pitched take on the death barks pioneered by British mainstays like Karl of Bolt Thrower or Dave ex-Benediction. Occasionally there will be some atmospheric whispers added (like in the song "Deadened"), or some backing snarls paired up with the primary grunts, but this might be an area where the project could use a little more distinction. Frankly, though, the song structures and hooks are captivating enough that it's easy to let this slide, the vocals don't falter between faster or slower progressions, and the lyrics to tunes like "Deadened" and "The Everbleeding" match both the elegance and punishment inherent in the songwriting. The cover artwork is a little lazy and unambitious, a betrayal of the more sophisticated music, but it's not the sort of thing that looks to have been tackled with any sort of budget, so what can you do? Ultimately, To Reconciled Solitude does not sound like the lost footnotes of some unknown band, but a polished and professional work that, with a more widespread distribution, might damn well hold up to other melodic death maestros of the age: Be'lakor, Insomnium, Canopy, Ne Obliviscaris. The Germans might not have quite that level of variation, the songs seem slightly more mechanistic, but the potential is glaring, and only a very thin membrane separates this from those better known groups.