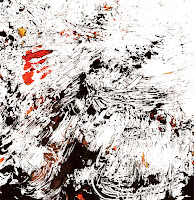 Finland seems to have put a premium on its out-of-the-box, unusual, psychedelic black metal, with a band like Oranssi Pazuzu starting to generate some worldwide interest and then another level of solid and experienced acts helping to steer the form towards further nuance. A more pertinent comparison for Mörkö would be Jumalhämärä, an act that shares several active members in Harri Talvenmäki and Heikki Kivelä who perform the rhythm section here. Like Jumalhämärä, this project has been kicking around since the mid 90s, though a hiatus was taken several years back to release experimental rock records under the name Disorder of Deadeight, which served as spiritual precursors to this latest, four track, 35 minute effort under the original moniker.

While fans of the one (Jumalhämärä) would certainly appreciate the other (Mörkö), there are a few subtle differences here worth exploring. Though it's free-flowing and superficially, deceptively jammy on a surface level much like that band, Itsensänimeävä is actually a more structured and certain experience bleeding together cycles of hypnotic repetition, jarring dissonance, organic percussion and two particular strengths that really drew me under the spell: the uncanny vocal arrangements, and perhaps more importantly, this band's amazing ability to weave original post-black tremolo picking patterns that are anything but boring drifts of intellectual waste...they actually captivate the listener with fulfilling successions of notes that subjugate and then strangle the imagination. Perhaps the most obvious example of this is the monolithic latter half of the nearly 14 minute "Kosmoksen huhmareessa", where the drums die out and cleaner guitar tones are used to distribute wave after wave of these fascinating, mesmerizing patterns that rank among some of the better experimental guitars I've heard on any metal record lately. That said, they also integrate them into some of the more metallic progressions on the record seamlessly, oft with a more traditional blackened bent that fuses into the jangling, distorted grooves (like the depths of "Nesteen luo").

Mörkö also shows a capacity for warmth and consonance in the music that constantly contrasts against their wilder half, and this is evoked through some of the lighter, dreamier, almost shoegaze riffing patterns here. Bass lines are busy throughout the album, possessive of a cleaner, punching tone with stolid grooves that can just as easily shift into the faster picking of the rhythm guitar. It's presence conjures comparisons to other Scandinavian curiosities like Norway's Virus, in which the presence of the low end, swerving thrum of the instrument provides its own source of mind control, though I wouldn't say the composition of the lines was as strong, as, say, The Agent That Shapes the Desert. The drumming here is fantastic, with a lot of toms that help lend a 'drum circle' feel alongside the snaking, eerie guitar patterns, but again they can easily mutate into the appropriate, busy blasting with loads of jazz-like fill eruptions which themselves provide an whole other level of listening pleasure. On some level, the percussion and playing all around is intensely technical and meticulous, but the organic choices in production give leave a live, improvisational impression reminiscent of how I felt for Jumalhämärä's Resignaatio record.

But I've got to make special mention of the vocals, which are seemingly all over the place, yet compelling despite the gulf in techniques. Monotonous spoken word passages, faint and raspy whispers panning across the headphones, haunting atonal harmonies, and even something so guttural and unnerving that I could not readily identify it as a human voice! There are several lines of recognizable black metal snarls, but they tend to be the exception to the rule here, and often seem to support one of the other techniques rather than stand on their own. All told, in first listening through Itsensänimeävä, you've got next to no idea where anything is going next, and on further repetitions, the subtleties of the picking patterns and the layers of percussion really begin to set in and reveal just how much bloody work went into this thing. Admittedly, I felt the album was a fraction on the short side, if only because this is such 'lose yourself' music that 35 minutes feels abrupt. 1-2 more tracks and 10-15 minutes would have created a more substantial escape, but then on the other hand it might also run the risk of stretching ideas a little too thin...so it's not a major flaw.

Points also for the translated song titles and lyrics that were included in the promo...I hope this might be the case for the actual album release, and more bands (of any primary language) need to do this. I don't speak a lick of Finnish, so getting to experience these psychotic images first-hand was a treat, and elevated the music itself to yet another level of sickening intimacy. Prompt, poetic and disturbing, I took away a similar vibe as I have from numerous Jute Gyte albums, and I cannot stress enough how important good lyrics are at getting the bigger picture of an artists' intentions. Ultimately, Mörkö prove another entity worthy of the margins of the black metal format, thinking a little beyond and outside (if not 'above') the status quo to summon forth fascinating results. Having heard the other, aforementioned groups in this scene, I can't claim that this was entirely a novelty, nor is it completely consistent in riffing quality, but it holds up and reveals further details through a number of listens, and is easily recommended to other experimental/avant-garde/blackish groups like Virus, Yurei, Ved Buens Ende, Candy Cane, as well as the members' other work.