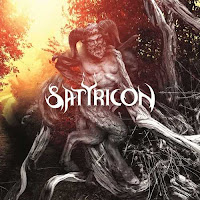 Man, when people tell you that the intro piece to this album, "Voice of Shadows", sounds like a laconic, snakier twist on the old gospel hymn "When the Saints Go Marching In", they really aren't kidding. That is exactly the impression it leaves, and not a very exciting one. Suffice to say I was shocked, then, that the rest of Satyricon's eponymous 8th full-length is nearly as lazy and drained sounding as this one song. It's essentially a 'mellowing' of the black & roll techniques adopted for the last pair of records, attempting unsuccessfully to generate a more evil, occult ebb and flow to the riffing progressions. Now, as usual, I've got no problems whatsoever with what they aim to achieve here. I'm by no means some closet troll expecting Darker Medieval Times or Nemesis Divina Mk. II, and unwilling to accept any deviation from my parameters of underground acceptability! Not happening (possibly ever). I've long appreciated Satyricon as an evolutionary entity, uninterested in putting out the same record twice, and though they've made a few missteps here or there, I was actually on board for Now, Diabolical and Age of Nero, their 'Black Album' phase. Revolutionary? Fuck no, but the nihilistic Satyr-barks, stripped-out complexities, and concentrated, rock-like grooves sounded fantastic on my car speakers, and I found a lot of the songs memorable enough to continue visiting them for years to follow.

Satyricon is not a particularly shitty album by any means, nor is it void of ideas, some of which breathe new air into the Norwegians' canon; but for a good number of spins I just haven't had the hooks sink into me. I feel like it takes quite a few cues from its predecessors, with a load of simplistic grooves in tunes like "Our World, It Rumbles", and perhaps a wider spread of riffs than either of the last albums. Not only because there are more songs, but most of them possess a greater degree of internal variation than those found on Age of Nero. Guitar progressions are performed spaciously and patiently, relying quite strongly on their ability to captivate the audience but only occasionally doing so. Transitions are often quite overt with the percussion dropping out, and in general I'd say that Frost's presence on the record is entirely laid back and he's playing well beneath his ability. Not that I expect every madman drummer to be jocking it on every record, and certainly the guy wasn't pushing his limits for the last decade, but the performance just doesn't possess much personality to distinguish him from anyone else. I guess it takes some tact to reserve oneself like this, but I just didn't find most of the individual beats interesting. They simply seem sublimated to the more prevalent guitar patterns, almost like the guy was playing on one of Opeth's prog rock records with no metallic content in sight. The kicks and snares in pieces like "Natt" are steady but powerless, so much is left to the atmosphere above...only a few cuts like "The Infinity of Time and Space" show that the guy is even thinking about flying off the hook.

Naturally, the tunes here seem to lend themselves to more vocal diversity than the prior outings, and yet Satyr sticks to his bleak barks exclusively. He'll emphasize and sustain certain rasps for a more dramatic, throaty effect, but there aren't a lot of meters or lines here which deviate from the structures he's been spitting since Rebel Extravaganza or Volcano, only the music itself is far less explosive or exciting. He'll also do some spoken word stuff ("The Infinity of Time and Space") when they switch to a segue of cleaner guitars, or some tuneless clean singing ("Phoenix"), but both are admittedly pretty boring. Shimmery choir toned keyboards are placed sparsely throughout the record to enforce that angelic laxness inherent in the songwriting, but they rarely add much accept to stress the spiritual longitude and latitude being committed. I'm also not too impressed with the moody, clean sections where a few basic chords are strummed as if this were some minimalist Pink Floyd cover band. Really, this shit is child's play! You don't get a pass just for incorporating lowest common denominator blues or psychedelic rock elements into your songwriting, you've got to ensure that they're just as interesting as anything else going on, that the atmosphere they manifest is an effectively compelling contrast to the harder hitting rhythm guitars...there have to be a half-dozen instances on this album where such bland breaks in the action appear, and add nothing to the sum experience.

In the end, a WHOLE LOT of weight rests upon the rhythm guitars themselves to maintain the listener's attention span, and while they're infinitely better developed than anything else on the disc, painfully few of them have those morbid hooks I enjoyed from their recent works. At its most energetic, Satyricon feels like a replay of material off Now, Diabolical being performed at the predicted mid-pace with guitars that simply seem to be paraphrased off other songs and marginally tweaked. Granted, these are imbued and alternated with more shining, atmospheric phrases and a few straight black metal charges ("Walker Upon the Wind"), but the dry mix of the drums, and the creatively bankrupt, might-as-well-be-absent bass lines just leave Satyr with far too much room for his riffing to breathe. Where simple tracks like "K.I.N.G.", "My Skin is Cold" and "Commando" rocked my toes off, even the best material here like "Nekrohaven" seems to scrape at my socks and then give up for a cigarette break. It just feels like Satyricon are hanging out, rolling tape and laying out any cohesive riffs that come to mind, with little thought to their emotional impact or the overall strength of the performance. The lyrics, while appropriately minimal in accordance with the music, don't seem so capable of that poignant efficiency you'll find on some of the Darkthrone records.

Satyricon is one of those eminently frustrating experiences, because while I reaped little enjoyment out of it, and think it's easily the nadir of all their full-length efforts, I certainly can see where they were going and might have really enjoyed this contemplative, lackadaisical version of their style...if the songwriting had just been stronger, and the atmospheric components more resonant, weird, and in tune with the personalized, arcane philosophy of the lyrical themes. I almost felt like this was their attempt to tune into the whole psychedelic 60s/70s occult prog rock thing trending so heavily these days, only accessing that realm from the black & roll momentum they had been building over the previous decade. Oh, it can be done. Unfortunately, it's just not an intriguing transformation when you compare it to something like Tribulation's The Formulas of Death, which was this 180 degree shift from a hyper Swedish death/thrash band into something entirely different and unexpected. Satyricon have manage to string together an album here which is simultaneously more intricate and less compelling than those decisions leading up to it, and I really wish there had just been more to like about it. There SHOULD be more to like about it. As it stands: a handful of near-ragers and a bellyful of soon-forgotten, background black metal valium.