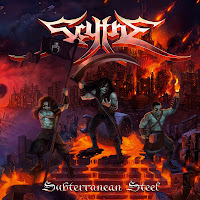 Many readers will likely recall the Chicago tyrants Usurper, who were more or less a crushing 90s amalgamation of Celtic Frost and Venom vomiting vitriol straight from the Midwest, with a handful of cool records like Diabolosis and Skeletal Season. Scythe is essentially the direct continuation of the Rick Scythe persona from that era, embedded into a more uptempo speed/thrash chassis with death & black metal dressings. Subterranean Steel is the second album of this new trio, and I was taken aback at just how brutal and riff-driven this was. The cover art, while fun, doesn't do the music any favors, because you really don't get the impression that is some visual based gimmick act circa Goddess of Desire or Dethklock, but a more serious exhibition of spikes, leather and inferno...and some sharpened spikes indeed.

The guitar tone here is crisp and boisterous, the riffs generally built as harsh, hellish approximations of trad thrash, speed and heavy metal that can 'rise to the occasion' of Scythe's wrenching growls and snarls. This leaves a lot of room for variation, and indeed the track list across Subterranean Steel doesn't shy away from covering a lot of ground, from the slow and steady thrashing of "The Bray Beast" which reminds me of a more primitive 80s Testament, to "Nights of Terror" which is pure nasty speed metal lickin' that comes across like a more muscular alternative to early Megadeth or Metallica...to "Subterranean Steel" itself which is possibly my favorite on the disc, steady and unbridled chugging force with a nice build to a more atmospheric climax. Almost all of the riff construction is deviously simplistic through the record, but even though one can draw parallels to this or that band from the past, it still seems consistent and fresh and not so much of a ripoff as an homage, much like Usurper did. And for those seeking a little more extremity, the trio answers with pieces like "The Grunting Dead" or "Beyond the Northwoods" that channel bombastic old black metal like late 80s Bathory into the equation.

The album wouldn't succeed without its abrasive, punishing tones, and these extend beyond the growls and guitars to a potent drum mix in which you can hear each level snare strike and thundering kick that 'bulk' up the force of the riffing. The bass lines also pump along with some volume, although structurally they often seem to support the rhythms directly and thus can seem a little less noticeable until he swerves off into a groove during a change in patterns. The leads to tunes like "Thunder Hammer" are generally pretty basic and bluesy, and not all that interesting, but considering Rick's double duty as guitarist/front man I was hardly expecting Zakk Wylde. In fact, Subterranean Steel as a whole is just not a complex or frenetic experience. It's more about confidence, certainty, and crushing the listener's ear drums in with an extreme evolution of classic metal tropes, and the horror-borne lyrics fit right in with Scythe's later Usurper material. Ultimately, while its not unbelievably memorable or unique, this is just a fun record with some righteous head bangers. Like Usurper, Scythe keeps it heavy and honest, and that's why this impious Illinois institution is in no danger of closing its doors.