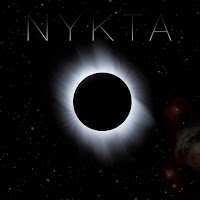 It's been 17 years now since Zemial's For the Glory of UR, a minor cult classic of Greek black metal which showed the potential to escape that tier of bands loitering the shadow of Rotting Christ's international success. Since that time, the multi-talented Archon Vorskaath has continued to record and release music at respectable intervals, crafting towards a more primitive, blackened thrash/heavy metal hybrid which resulted in some solid material like the Dusk EP a couple years ago (of which one track is actually included here). When I saw the cover for Nykta, I admit to a little confusion, since there was no Zemial logo, and it looked like one of Samael's minimalistic cosmic visuals of the late 90s, or something Hunter Hunt-Hendrix would use to 'transcend' black metal with Liturgy (quite a lot like their debut, Renihilation). But hey, it's not like one can trademark the use of an eclipse, black hole or celestial phenomena, and aesthetically I'm happy to say that this the image fits about 50% of the songwriting, which is in fact quite an interesting spin on the direction Archon was already headed.

At its core, Nykta is still a work of hybridized thrash and epic heavy metal riffing, with a surprising level of detail and atmosphere that hints at far more than just the latest retro tribute to the 80s. Sure, a load of the note progressions here smack of staples like Slayer, Bulldozer, Venom and Possessed, but the songs seem to vary between more direct black/thrashers like "Under Scythian Command" and more extensive, progressive cuts like "Ancient Arcane Scrolls" that thrive off their variation. He peppers the riffs with an abusive amalgamation of blackened rasps and brutish grunts, but also uses some cleaner narrative spoken word stuff, and occasionally a gritty but melodic delivery. The percussion really pokes through the mix, a clean mix of snare and bass with some really loud and busy fills from the higher pitched toms. Actually, a track like "Ancient Arcane Scrolls" half feels like a drum solo smothered in riffs, thanks to the jamming, jazzy fills which would be interesting enough to listen to if isolated from all the guitars and vocals. Another of the techniques that stood out to me were the tones of the leads and melodies, which were pretty stripped down and seemed like they were being performed off some 70s prog rock record. It's just another little detail which one wouldn't normally expect out of this style...and though it's not nearly so dramatic, reminded me of Sigh's playing on records like Hail Horror Hail.

He goes all out psychedelic space-prog thrash on the new, extended edition of "In the Arms of Hades" here which manages to fill outs its 11+ minute length with a spacious bridge and some excellent drums. And I have to say, he might just be on to something here. Combining the dirt, speed and aggression with these more trippy, joint-lighting freakout elements is not something I hear all the time, and really this is a centerpiece for the entire experience. Love the wavering Tom Warrior/Nocturno Culto vocals he dishes out in the first verse. The other would be "Pharos", 15 fucking minutes of cosmic escapism, prog rock/ambient contrasts invested with weird vocals, dirty but faintly shimmering synthesizers, and some excellent guitar lines. I also appreciated the intricacy of a lot of his speedier, thrash riffs, like in the latter half of  "Breath of Pestilence" which is mind-blowingly cool without being exceedingly technical. The rhythm guitar tone across Nykta is quite old school and never over saturated or overdriven with distortion; lending the songs an earthy authenticity which helps the music feel dated despite its obvious nuance. Apart from the gently booming tone, the bass lines don't usually have a lot of presence beyond feeding the rhythm guitars some depth and richness, but this is the only gaffe I could find in the production, and it's excusable.

The other issue I took was with the outro track "Out of the Cage - 333 for Drumset and Mechanical", which just seemed like 4 and a half minutes of silence, with what I believe might have been a faint drum click (?) in there...at least on the digital promo I got. Might be an error, but if not it's entirely useless listener trolling and doesn't belong on what is so otherwise inspired an album. It's like restoring a beautiful old automobile to road worthy perfection, and then slashing the tires. Beyond that, Nykta is accordingly magnificent, an old dog trying both new and old tricks and achieving a result that uniquely fits flush with the wave of 60s and 70s inspired psychedelia and prog rock pervading multiple metal genres in recent years. Of course, if you're not as into the marginal experimentation, and you just desire some of the blazing, infernal material he meted out on the last recording, tunes like "Under Scythian Command" and "Eclipse" will sate the avid fan of groups like Deathhammer, Antichrist, or even the latest few Darkthrone records. Nykta is a deceptively varied work which is hands down the most interesting Vorskaath has released, and while the guy has rarely if ever really 'disappointed', I found this superior even to the debut, and have listened through it (skipping track #9) a dozen times in the weeks since I received it. Hell, in lieu of a few surface flaws, this is quite likely to show up on my personal year's end list...it's really that compelling.