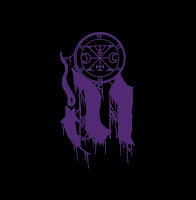 Manifesting is a Minnesotan death metal duo with a pair of evocative pseudoynums (Sepulcherous and Maw, respectively) who have set out to deconstruct the genre into its most primitive fundamentals, creating a quintessence of raw, pummeling downtuned chords and roiling grooves that structurally and stylistically eschew any sort of progression, technical merit or advancement beyond what was created at the twilight of death metal as a musical form. Seriously, the material manifest for Descension Through the Seven Forbidden Seals EP is not unlike the primordial, mucky stew of organisms from which human evolution was supposedly spurred forth. It might be argued that the writing here lacks any real semblance of nuance or grace, or really much of any thought at all...it's as if the pair turned on their amps and let the abyss flow them, churning out the first chord patterns that their muscle memories dictated...

Eerily, and curiously, the EP is bookended by a pair of chanted male choirs that sound like they might have been sampled from some recording of monks, which misled me into thinking the music might seek out a more atmospheric aesthetic, but once those enormous, null rhythm guitars broil and blast through "Asomatous Hubris" you feel like you feel like some ancient prey, clubbed and dragged back to the Neanderthal's lair for consumption. While the track list doesn't exactly follow a uniform tempo pattern, shifting through slower and faster sequences, the guitar progressions are uniformly minimal to a fault, often just a pair of slovenly chords swishing back and forth like a bad breakfast in your gut. Several tracks ("Disciples of Murmur", for example) border on death/doom territory with their slow, steady sense of bombast, but the pair is fully capable of careening into a warped, nihilistic frenzy of blasted insanity to contrast the mournful, soul devouring gulfs of nihilistic lumbering. Drums do take a back seat to the rhythm guitar, but they're really raw with slapping kicks and tinny cymbals that actually fit cohesively into the mix.

The bass lines generally provide a grimy shadow of the rhythm guitars, while the vocals are a 'no holds barred' sustained growl every bit as colorless as the note choices. Lyrically they provide brief, horrific glimpses of necromancy and occultism, generally more interesting than the music itself, but that's not saying much, since what Manifesting have set out to accomplish is to channel some of the filthiest ancient death metal (Incantation, Autopsy, Rottrevore) in reverse, reducing even the formative works of that important early 90s period to soaking wet cemetery sludge. On the one hand, I have to respect the dedication here to cleanse all warmth, melody, complexity and memorability from the songwriting, but on the other a lot of these riffs did absolutely nothing for me, so basal and effortless their construction. Thus, ultimately, Descension Through the Seven Forbidden Seals became something which relied all too heavily on its own sense of voluptuous primacy and foulness, and not on mesmerizing music. This is mad dark due to the clamorous, raunchy production, but not particularly evil in construction. I wasn't completely sold on the material, but other fans of grotesque atmospheric death metal like Vasaeleth, Grave Miasma, Wrathprayer and Hellvetron might elicit a stronger reaction.