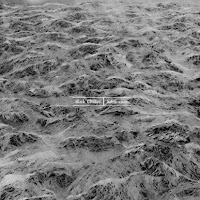 I'm often at a loss as to what constitutes a demo recording or an 'official' album, especially in the metal underground, where the latter can often prove just as important or substantial as the former. In the case of the Submission demo by Black Chalice, it probably has something to do with the studio process and the original intentions for the material. This is actually a considerably longer work than the Obsidian album I covered, and recorded the year before. Strangely enough, it offers some of the added variation I felt could have strengthened that work, but at the same time it's a little less consistent overall, and there were a few points at which I felt myself nodding out. I guess this better deserves the brand of 'death/doom' than Obsidian, because the growls here reign supreme, and it definitely possesses a more mournful, crushing, funeral pall, but texturally I also felt it a little dryer, less saturated with the imagination of that album.

Submission opens with a four-minute instrumental constructed from clean, sad, scintillating guitars that eventually builds into a union of chords and single picked melodies, and then beyond that comes the really heavy stuff. There's still a combination of drudging, filthy chords and melodies, but the former feel a little more gratingly tuned, and the latter seem slightly less tethered to the bottom line. The drums are really underwhelming here, faint beats that barely support the huge, ugly riffs canvased above them, though they pick up steam in the bridge of "Regret" when they start hammering away. The guttural vocals take on a maudlin, almost monotonous drift as they would in many recordings of this field, and they don't really distinguish themselves as being particularly weighted or brutal. "Submission" itself features more clean guitars, and some of the submissive, clean vocals that are commonplace on Obsidian, but it also has a pretty weak transition and then picks up into what is basically an admixture of driving, older Katatonia-style guitars. I found "Cornea" more to my liking, though the rhythm guitar distortion seems to clip a little and nearly bust out of its own recording.

The last track, "Wain" seems to come from a separate recording session and has a more repressed quality about it. Melodic vocals, groovier riffs and a bass-heavy, Sabbath like substance to some of the riffing in the bridge. Perhaps an attempt to make inroads to a more antiquated style of doom metal, but it does seem a little out of place with the rest of the material, and sloppily constructed so that the riffs don't exactly flow into one another in a meaningful way. That said, I actually did enjoy the project of Patrick using his clean vocal style over this more psychedelic riffing aesthetic, I only wish he were louder. Lyric-wise, Submission was quite good as the other Black Chalice material, especially the song "Regret" where I really enjoyed the closing line: When will we be sorry? We will be sorry. Still very personal and deep, wrist-cutting and depressing, but perhaps a bit more image-laden. Ultimately, I think this was a work borne of experimental intentions more so than Obsidian, but some of the songs drudge on a little much without many ideas of note, and "Wain" just didn't fit for me. Not without a few moments, but I simply felt more rewarded by the experience of Obsidian.