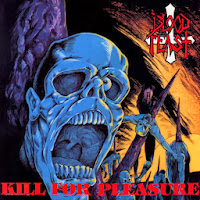 One of the greatest dangers of an underground metal scene driven by nostalgia is its tendency to inflate the value of nearly any recording written and released during a particular period in time. So it goes in recent years for the early death metal stuff, and so before that it went for the Golden Era thrash metal. Second and third tier bands (at best) are showered with credit, failed records misremembered as successful, and buying trends produce loads of reissues, which is honestly the best part of the phenomena, since it puts some real gems back into print. New Jersey's Blood Feast, through no fault of its own, is certainly one of many indistinct thrash bands of the 80s to have garnered some buzz due to their placement in history. I can faintly remember a little discussion of Chopping Block Blues (their superior sophomore effort) in high school, thanks to one other student owning the cassette, but these fellas were hardly front page news...and for a reason.

Now, before the hair gets ruffled and the panties bunched, I'm not advocating that Blood Feast was some horribly incompetent band. As far as the New Renaissance Records roster, Kill for Pleasure was a rather middle of the road release, hardly the nadir of a label which produced only a handful of gems. For me, though, two of those particular gems, Indestroy's self-titled and debut and the North American release of Sepultura's Morbid Visions help exemplify exactly what it is I don't enjoy about the Blood Feast debut. Both had comparable, filthy speed/thrash aesthetics which could easily be filed under the proto-black/death metal category. Both brimmed with fun, unforgettable songs, dirty and distinct vocals and hooks that felt at the minimum threatening and at most downright Goddamned evil. Kill for Pleasure, on the other hand, just sounds like someone closely memorized a bunch of Slayer songs, trimmed out the infernal nuances that made them so revelatory and unique, and applied a vocalist who at best could be said as a more grotesque attempt to one-up Jeff Becerra of Possessed. Sure, everyone was influenced by Slayer, but if I had a dime for all the half assed "Black Magic" riffs here I'd have made back my money for the record. To dub this debut a bargain bin backup for Hell Awaits and Seven Churches might seem a cruelty or disservice to some, but it's nonetheless the honest truth.

But let me step back and talk about what I feel Blood Feast actually had going for them. For one, though horror influences persisted in the hard rock/heavy metal scene as early as the 60s (potentially earlier), the sort of 70s/80s inspired splatter metal was still pretty fresh by the time Kill for Pleasure rolled out. In fact, part of the charm anyone would feel for this or Chopping Block Blues is the nostalgia for the endless slasher sequels and 'forbidden' mock cannibal VHS tapes that started to thrive through this particular decade. The lyrics here largely revolve around films and stories of serial killers, mythical creatures of the night, and occult fueled apocalypses. It's Halloween metal for those individuals who privately venerate the holiday over the course of the entire year. That doesn't make it incredibly unique in the 80s, but bands like Blood Feast were unquestionably blueprints for the throngs of thousands of gore or kitsch-horror obsessed death metal mavens to follow. If Kill for Pleasure wasn't an inspiration for the roster of Razorback records, for example, I would be completely shocked. So that sense of antiquated slasher atmosphere and brutality permeates the experience here, and really makes me wish to like it more than I do...

Unfortunately, the music is just not up to the task. Boilerplate chord progressions paraphrased from a good number of other records leading up to it, thriving only off the inherent visceral intensity spearheaded by Gary Markovitch, the sadistic vocalist who channels the aforementioned Becerra's style into ghastlier heights of morbid grunts and vicious snarls. Oh, he's a lot of fun on a tune like "Cannibal", but the supporting rhythm guitars fail to stand out, and it feels like you're the target of some foot chase perpetuated by a knife wielding psychopath, only to realize in the middle that this is a pretty boring foot chase. 'Just kill me.' As I've persisted through the record every time I've broken it out in the past 25 years, I've kept waiting to hear those surprise hooks flutter in from beyond the verses, or some climactic chorus carnage that made me wanna flip back the needle for a replay, but they just never happen. Like a lot of its contemporaries (Darkness Descends or Reign in Blood), speed is the general rule, with a couple meaty palm muted breakdown grooves for the moshers, and those are across the board uninteresting. Naturally, I don't have a problem with such a driven, breakneck album, but I at least expect some catchy riff patterns strewn in there, and Kill for Pleasure does not deliver.

The production is a bit sloppy, so several of the complaints I've read are warranted in this area, though I have no idea why one would expect a major budget on such a small label. There are plenty of soiled and amateur sounding records I love to death (like the two other New Renaissance releases I mentioned above), but that's because the studio choices (or lack thereof) seem to emphasize the quality of the songwriting, or at least ensure that the listener is paying closer attention. Kill for Pleasure is dense and workmanlike, with Gary's lunatic vocals up front above the considerable drum mix and wet-ass distortion of the rhythm guitars. The leads are also pretty gross sounding, though occasionally they seem better prepared and more melodic than others, at which they seem like afterthoughts that sadly lack the frenetic capacity of what Slayer were weaving into their tunes. Blood Feast is definitely one of the earlier thrash bands to put such a distorted and sleazy tone on the bass...in fact it's so thick and repugnant that it places Kill for Pleasure almost into early grind territory at times (circa Scum or Horrified). A good choice, but the bass lines themselves are hardly interesting enough to provide more than a gut-spilling accompaniment. Drums are fired up and abusive, to say the least, but rarely if ever enter that extreme metal territory that Hoglan and Lombardo were pushing.

Really, Markovitch is the center of attention and the only component of this record that I found marginally entertaining, because he's just not holding back. He's crazy. Matched up with some truly bewitching or evil progressions of chords or melodies, Kill for Pleasure might have been sinister as shit, even turning the lead vocal down a notch, but this is ultimately 42 minutes of average schlock that secedes from the memory almost as soon as its injected. I mean, take Rigor Mortis' eponymous record, an excellent if imperfect example of how to integrate frightening, morbid rhythm guitars with dark vocals and cult horror lyrical themes, or older records like Hell Awaits, Metal Inquisition, hell even Welcome to Hell and Black Metal leave an infinitely more wicked impression upon the psyche than this; not to mention Chopping Block Blues which is more varied, unusual and interesting, even it trades in some of the savagery. Kill for Pleasure is not a compete dud, some acceptable slasher metal to spin in the background while you organize your Friday the 13th DVDs, but its only merits stem from its over the top frontmanship and unflinching rawness. Your heart won't quicken, you won't jump at shadows, and...no goosebumps. A bloody steak, sure, but not a tasty one.