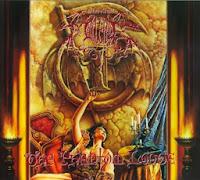 The Phantom Lodge is another of those 90s curiosities which begs of the listener: just how serious do you need to take your black metal? For at least the first three records, Anders 'Blakkheim' Nyström was clearly taking the piss with Diabolical Masquerade... first with the personal and ludicrous Ravendusk in My Heart, an introspective journey of this silly alter ego he created, which straddled the dangerous line between symphonic, Gothic bombast and genre parody. Next, he puts out The Phantom Lodge, which seems like some fairly adept caricature haunted house black metal with a few strange choices, namely various examples of overt idol worship and then a few more bare-bones riffing tracks that lack the cheesy eloquence of others. Don't get me wrong, I have a very soft spot for this band and others like it (Gloomy Grim, Cradle of Filth, Hecate Enthroned, etc), and once enjoyed this even more than the debut, but I've shifted opinions in recent years since The Phantom Lodge just seems to suffer ever so slightly from an identity crisis, a lack of consistent direction...so now I think they're equivalent quality.

Had it all been in the vein of the first track, "Astray Within the Coffinwood Mill", bearing one of my favorite song titles in history, I'd praise this one to the rafters, but in reality there are only 3-4 tunes showcasing the symphonic, cheesy and superficially spooky synthesizers. Anders actually takes the subtle approach with his key pads, honing in on just one sound of electrified strings of choirs rather than crafting entire orchestras that offset the guitars and vocals. This is primarily a guitar album, just an atmospheric one. Riff-wise, there's a tremendous influence from the classics here: Darkthrone, Bathory, Celtic Frost all form the foundation from which Blakkheim has built this experience, and he utilizes a lot of slow, grooving chord progressions as opposed to endless tirades of blasting and tremolo picking. I actually really dug the drums at points on this, especially the warlike fills that transform into double bass thunder on the first cut, where you even gets some To Mega Therion-like timpani thumping along in the background to the evil ass grooves. That said, I did get the impression that a lot of transitions were just pulled out of nowhere. They're generally interesting and even catchy, sometimes an excuse for Anders to throw on some narration in a manly, deep voice, but they can feel a little patchwork in structure and that persists throughout most of the tunes.

I'm also not so sure how I feel about the 'hero worship' segments of the album. For instance, for "Upon the Salty Wall of the Broody Gargoyle" (told you it was ridiculous), he spends most of the song vocalizing his Tom G. Warrior impression, and a pretty decent one at that...to the extent that I actually thought it was the genuine article on a guest spot. But then the goofy chorus riff where he starts rasping the song title in a malicious black metal imp voice totally takes you back out of it. It's...unusual. In the latter half of the tune "Ravenclaw", he uses this grating inflection reminiscent of Quorthon on the 90s Bathory material, though a bit nastier. Another quirky decision, not only for the change in vocals but also because the pagan/Viking theme of this song doesn't seem to fit the campy horror implied by the titles of "Astray Within the Coffinwood Mill", "Cloaked by the Moonshine Mist" or "The Walk of the Hunchbacked". That's not to say these stranger tracks lack some decent riffs and compelling atmospheres, but they create an unevenness that makes The Phantom Lodge feel more like an EP with some experiments thrown on, despite its 43 minute duration. "Hater" is arguably another oddball, since it seems like a more straightforward black/thrash tune with some screaming...

Anyway, the other 5-6 tracks are all pretty damn solid, often excellent, and themselves contain a lot of variation, like the woozy dissonant chord patterns woven like twisted thread through "The Blazing Demondome of Murmurs and Secrecy" or the glimmering, warmer melodies used in the chorus and bridge for "Hunchbacked". The drumming is generally great, with a few exceptions like "Hater" where it feels too thin in the chorus. Vocals are also a highlight, Blakkheim attempting to sound as delightfully wretched as possible, and as I said, even pulling off some excellent productions. The bass is audible but doesn't add a lot as far as interesting note selections, and the guitar chords (picked fast or slow) have a thin but effective tone to them which permits the kick drum and vocal barking to steer the experience along. Lyrically it doesn't seem to center so much around the assumed persona of the 'Blakkheim' character, though I still got the impression that a number of them were from that character's point of view (certainly in "Demondome"). A lot of the tunes have a fixation on occult horror, though they don't always match up very well with what you think the song will be about from its title. Considering that most people probably think of Diabolical Masquerade as a joke, though, they're well enough scripted, but I definitely wanted "...Hunchbacked" to be more about Quasimodo, or "...Coffinwood Mill" about some creepy undead, and the lyrics are not really that...

The Phantom Lodge is not without its flaws, and it remains a little puzzling even 16 years later, but there's a good chunk of this disc which has become a bit of a staple for me around Halloween. I'll marathon it with the first Gloomy Grim, Cradle's Midian, Dusk and Her Embrace and a ton of King Diamond, Mercyful Fate and 80s Ozzy solo records, and people seem to enjoy the mix. Nothing here is super-serious sounding and it's not likely to please anyone whose universe begins and ends with De Mysteriis dom Sathanas and Det Som Engang Var, but if you're not opposed to a 'lighter' approach to black metal as conceived by someone of the Count's mentality (from Sesame Street), I can't recommend this enough. Atmospheric and dreamy, or downright carnal at other times, it's just another one of those divisive reminders that at one point, a lot of people explored black metal because it was 'fun', instead of using it as a precursor to suicide or shooting someone. Not welcomed by the People Living Under their Parents' Stairs, but, hey, it's all good, folks. If nothing else, we can take away from this that Blakkheim could have done a straight 80s Celtic Frost copycat band and I would have paid to hear it.