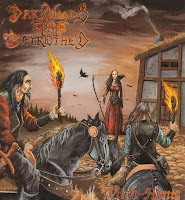 I first encountered Darkwoods My Betrothed when browsing a specialty record store in New Hampshire, where they had imported a copy of their 1996 sophomore Autumn Roars Thunder. This was in my early 20s, and I was immediately drawn to the artwork, the band's interesting handle and the pagan themes in the song titles & lyrics. I was also interested in a lot of European labels like Solistitium, and more superficially, Fall had long been (and remains) my favorite season of the year. So I'm just a sucker for anything related to it, enough to pop $20 on a CD from overseas even though I'd have probably been smarter to save the cash for my university textbooks the following semester. Wait...nonsense! :slaps self: At any rate, I was not heavily invested into the Finnish black metal scene at the time. I knew and had collected a few of the more obvious groups (Beherit, Impaled Nazarene, Barathrum) but hadn't invested much further into their underground, beyond Thy Serpent's Forests of Witchery, which I probably picked up the same day I nabbed this. Still wrapped up in the other Scandinavian nations.

Autumn... was a curious record, with a lot of atmospheric clean singing comparable to Yearning (another Finnish export I later acquired), so I was eager to order their followup when it was available through Spinefarm a few years later. Surprisingly, Witch-Hunts took a few aesthetic turns from the first two discs, and relied more heavily on synthesizers to provide orchestration for the Bathory-styled riffing. In fact, it would not be out of the question to describe this as a hybrid of Blood Fire Death beats and rhythms guitars with the eloquent, sweeping grandeur of Dimmu Borgir's Enthrone Darkness Triumphant. A comparison that might immediately turn off a few curious parties who loathe the 'demon burgerz', but an honest one, because Witch-Hunts in some ways bears more semblance to the later 90s/early 00s wave of cheesy but enjoyable haunted house black metal attributed to groups like Gloomy Grim, Soulgrind and early Alghazanth. This stuff was clearly traceable to the symphonic Norse and Swedish sources as opposed to the foundation of Beherit, Darkthrone, and other raw and raucous entities that inspired the popular groups like Horna and their kin that we associate so strongly with the Finnish black metal scene of today. That's not to say we've got an In the Nightside Eclipse contender on our hands here, but Witch-Hunts definitely gnaws at the familiar roots which sprouted such a masterpiece.

This was easily the best produced of the three Darkwoods full-lengths, with a dense and broiling mix which for the most part manages to balance off all the important instruments. Though generally audible, the rhythm guitars do have a tendency to lose some luster when the keyboards are pounding away, but there are other points at which they take the center stage and the orchestration 'backs off'. The dirty grit of the guitar tone is one of the aspects that remind me of late 80s Bathory, but more particular it's the swaggering mead hall feel to a lot of the note progressions, especially where they are affixed to the constant double bass mugging. The leads, to their credit, really do stand out where they appear. This album, like most of the delightfully cheesy sympho-black of the 90s, gives me the impression that I'm riding some demonic merry-go-round on a fire-breathing nightmare steed. Corny but convincing. The keys are actually well arranged between pipe organ tones and lighter, sparkling pads which occasionally feel like you're listening to the incidental music for an X-Files episode. Accessible, safe choices are made that fall within a consonant classical camp rather than some dissonant, jarring, alien tones; the only real aggression is when they're sweeping along above a blast beat and incendiary tremolo pattern, together forming a mighty cavalry charge. Cranked at louder volumes, Witch-Hunts is definitely engrossing and clamorous.

There were synths on the second album, sure, but they were applied with a more back seat mentality, where here they've at least moved up into the front passenger position. Though many probably found the clean vocals from Autumn Roars Thunder goofy at best, I actually missed them here. You get some whispered, evil incantations, and the same salacious snarl you'd recognize from the older works, but there was just less variation over the album. Emperor Natteset is particularly impressive when he unleashes a sustained, gnarled rasp, but in retrospect I don't feel he was one of the more distinctive black metal front men of this period. Enough to do the job, and then some, but difficult to separate from many of his peers. The Hellraiser III sample in "Without Ceremony and Bell Toll" sounds pretty cool, plus it's just cool wanted to quote anything beyond the original film. Interestingly, the keyboardist here (and on Autumn) was Tuomas Holopainen who went on to become famous in Nightwish, so you can experience his bombastic classical roots developing here, and where the metal cedes and you're just hearing the keys or glimmering acoustics, it offers a well placed relief from the hostility. Tero Leinonen really kills his kit here! Unlike his other band Nattvindens Gråt (which also featured Holopainen) he can really open up with the blasting and thundering bass and I felt like he was engaging throughout. You can make out most of the bass lines, and somethings they start hammering themselves into the listener's perception, but normally they were strictly a support unit.

If I have one major complaint with this disc, it's that thematically the music felt more like a raging, glorious battlefield than an actual witch-hunt. It's creepy only in its superficial details...organs, pianos and synthesized choirs all fit the bill, but the level of ballistic punishment in the seething guitars just gives off the impression of murderous midnight black metal circa Emperor or Limbonic Art. Like a war between vampire lords being launched from the battlements of their grim, obsidian castles. Granted, this is an original story here and does indeed involve some warlike behavior by the witch hunters, so your mileage may vary. The latter half of the album is devoted to the actual "Witch-Hunts" trilogy, the strongest songwriting, and the lyrics throughout are quite good, but even here a lot of the content is blasting Scandinavian stuff which I just couldn't associate with the subject matter. However, that's just me...I'm sure most will not have a problem connecting the two, and of course we've had no shortage of intense black metal homages to witchcraft. The music on its surface didn't really leave me with the impression of some innocent (or guilty) village woman being stalked for her believes (real or false), and then there was no climactic, horrifying 'payoff' at the proverbial stake. I guess I never 'felt' the story, it never titillated my fetish for black cats, warts and flying brooms. Kidding.

But as a firm piece of orchestrated, savage aggression...Witch-Hunts works, certainly with a more broad appeal for the symphonic black metal fan of its day than its predecessors. I think it does lack some of the charm of the older material, and in the end I actually have come to enjoy the debut Heirs of the Northstar the most, because Pasi/Nattesett's performance there consisted of truly formidable, atmospheric screams and howls that really smothered the acidic rhythm guitars like the ravings of a disembodied specter. This one doesn't possess quite so many memorable moments, and where it does they are usually keyboard lines. Not the spookiest record to invest in this October, but then if you're a sucker for cult classics like In the Nightside Eclipse, Enthroned Darkness Triumphant, Moon in the Scorpio or Dusk and Her Embrace then you might find enough inspiration here to light your own pyres.