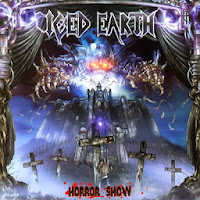 Iced Earth. Damn. Probably one of the bands I've received the most requests to review through the years I've been doing this, and ironically, now that I've stopped taking requests, I finally get around to. In reality, every October I get into the spirit for just about anything Halloween or horror related, cheesy or serious, metal or otherwise, and so in tracking down records to cover for the site I figured it was about time to not pass over one of the most obvious choices. Iced Earth's Horror Show, a huge thematic tribute to both Hollywood and history's most infamous monsters, a few of which you won't be surprised to discover are indeed human beings. A concept album, which aesthetically, I feel must be one of the most abject failures of its kind, even if the effort and budget that were lovingly placed into its conception are a little difficult to shun.

For years now, Iced Earth has been on my backburner as a band to revisit, because to be frank, I'm not into most of their music. The first three discs were solid examples of power/thrash crossover with some creative riffing and a lot of interesting lyrical subjects. I'd even argue that The Dark Saga, the Floridians 'first' horror concept record, was interesting, if flawed, because it chose a theme that was then-current and probed pretty deeply into it. That's not easy to do, especially when the theme was Spawn, the Todd McFarlane 90s antihero vehicle whose appeal was confined 99% to the colorful, muscle-rippling artwork, its characters and plot tossed in as an uninspired afterthought. The fact that Jon Schaffer and crew pulled off a respectable, appropriately angry tribute to that series is not lost on me. In fact, when it comes to the sheer magnitude of the band's production values, consistently impressive logo/artwork, and giving the fan something for his or her money, Iced Earth is among the most steadfast franchises in all metal music. I might not be a fan, and in fact few people I know seem to enjoy them beyond a handful of tunes/records (some outright despising their entire catalog), but there's a reason these guys are so immense in certain regions of the world. They didn't arrive at that success level running on fumes. They busted ass, and it paid off.

But, yeah, taste. No accounting for it, and Horror Show is a prime example of why I'm so rarely able to make that necessary connection with the band's songwriting. Half of that is because there are only a handful of tunes even remotely compelling, and the other that, for a concept centered on some of the greatest horror icons in history, the album is particularly bland, never once mirroring the creepiness I felt towards most of the subjects' individual films and stories as a child. In fact, Horror Show really sounds like it could just be about anything else, with monster movie lyrics thrown on top of it. Oh sure, "Im-Ho-Tep (Pharaoh's Curse)" does sound Egyptian thanks to the opening melody, and "Frankenstein" implements slow, meaty chords and a pace that resembles, to some extent, a shambling golem; but what is missing here is any real sense of depth, atmosphere or genuine tension and horror. Power metal isn't known for its highly kinetic use of dissonance or frightening note progressions, perhaps, but so much of the rhythm guitar playing here consists of bland chug patterns, or Iron Maiden riffage clad in Master of Puppets production but lacking the unforgettable chops that thrust either of those bands into the domination of the 80s.

Iced Earth confuses me, because here is a group with a great drummer (Richard Christy), one of the most well rounded rhythm guitarists and multi-instrumentalists in the genre (Schaffer), and clearly a guy who is among the more distinct power front men from the States (Matt Barlow). Rendered to its components, Horror Show is a beast. When the riffs hit hard, you feel a punch. The production is so blissfully pristine (surpassing The Dark Saga and Something Wicked This Way Comes) that every lead shines, every kick thumps, and Steve DiGiorgio's guest-spot bass lines have the aptitude to stand out. Vocal arrangements here are staggering in detail, with Barlow's air raid siren escalations complemented by whispers, deeper narrative cleans, female guest spots (as in "The Phantom Opera Ghost") and some truly corny narratives that have a hard time sounding convincing. Hell, it's not even that I can accuse Horror Show of lacking variation. They really roll the dice all over this thing, and it's certainly more diversified and orchestrated than the prior album. Ambition and musicianship really aren't the issues, but the execution just leaves so much more to be desired.

A few tunes are alright, like "Wolf" or "Jekyll & Hyde", mainly due to the neck-jerking riffs, madman Matt Barlow interchanges, and brooding acoustics of the latter (one of the few moments on this record I would argue are even marginally spooky). But then you've got a piece like "Ghost of Freedom" which is absolute garbage. A boring, dime-a-dozen 'power ballad' with generic acoustic guitar verses and touching, 'emotional' vocals that I can't make it through without exploding. Weak. Granted, Barlow is trying to sound more like "Cemetery Gates"-Anselmo than Brett Michaels, Jon Bon Jovi or Jani Lane, but it's still goofy and does not belong here. Hell, that particular song doesn't even have to do with a classic movie monster, it's an 'original' story about some fallen soldier which is completely unnecessary, patriotic self-service which would have been better placed on The Glorious Burden. Seriously, once they hit the climactic cliches of "Don't tread or me...live free or die!" I almost died laughing. I know it's supposed to be a tragic character which might work alongside Frankenstein's monster or the Creature from the Black Lagoon ("Dragon's Child"), but this is supposed to be a fucking HORROR SHOW.

Leave the sappy lamentations by the roadside. 'One for the ladies?' Don't patronize them. Why on Earth do you think we all listen to heavy fucking metal? It's to avoid shit like this...but worse, it's not even catchy, so cram those lighters up your sphincters. Another tune that pissed me off: "Damien". I'm sure many of you recall the original film The Omen, which was scored by Jerry Goldsmith, who did a tremendous job of creating an infernal tension with his strings, choirs, and Latin lyrics ("Ave Satani"). Iced Earth goes as far as to do a great job penning some lyrics from Damien the devil-spawn's perspective, but then there is nothing remotely frightening at all about the boring rhythm guitars or vocal arrangement. The moral of the story is: I would not want to meet Jerry Goldsmith in a dark alley on All Hallow's Eve, but if this is an example of the threat Iced Earth can generate, I'd have no hesitation to just them up and steal their candy bags. A sadly common thread coursing through this entire record. "Im-Ho-Tep" is at best a third rate "Powerslave". "Jack" isn't nearly as evil as it should sound, consider it covers arguably the greatest 'monster' of the album (the one that actually existed). "Dracula" is a good use of Steve's jazzier bass tones, a moodier sounding acoustic intro than "Ghost of Freedom", and some nice melodic power/speed licks with Barlow's screaming, but I did not think for a second that it effectively conveyed the atmospheric either Stoker's novel or any subsequent vampire telling to me (luckily Helstar had our backs 12 years prior to this).

Horror Show is essentially an endless tirade of grandiose arrangements that aesthetically fall short of their potential in dealing with the subject matter. I wanted classic horror. I got vapid Iced Earth. I wanted blood and innards. I got dullards. The lyrics are very often better than the music, and while they sound deceptively powerful via studio production, the majority of the riff patterns seem to tediously lack the debatable creativity found on the earlier records like the s/t or Night of the Stormrider. Barlow shines where he can, though a number of the layered vocal sequences seem tacky and needlessly dramatic. Like what Christina Aguilera might pull if she was fronting a metal record. Even if I were to compress this record down to an EP, the highlights still aren't as memorable as a random assortment of tunes off the first three records. And none of those were exactly masterpieces themselves. Horror Show is superior to its own successor, The Glorious Burden, that lackluster collaboration between Schaffer and Tim 'Try Hard' Owens, but that's not really saying much. At the end of the day, this is just a big, glossy package with good intentions, but without the fangs, claws, gills, wrappings, knives or zombie flesh to do them justice. These characters don't deserve such earnest, 'epically' average, charisma-free compositions. You'd be better off dusting your back issues of Vault of Horror and Tales from the Crypt, because even at their hokiest they've got the atmosphere and charm this so sorely lacks.