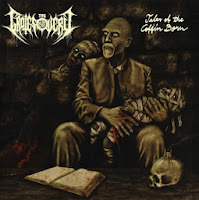 The Grotesquery, along with the more primitive Bloodgut, is one of the more conceptual projects assembled with the prolific Swedish death metal personality Rogga Johansson, who handles the guitars here. He is joined by a number of longtime collaborators (bassist Johan Bergland and drummer Brynjar Helgetun), but the real draw to this is probably the involvement of death metal 'royalty' in vocalist Kam Lee, who most will recognize from Massacre, but has himself featured in a number of other projects since that time. In fact, this isn't even his first dance with Rogga, the two having put out the Bone Gnawer debut Feast of Flesh the year prior to this, which featured a more brutal and churning style of death metal. Not that Tales of the Coffin Born lacks some punches of its own, being pure throwback death metal, but the inclusion of the atmospheres and story elements curb it from being a total zombie-mosh slug-fest. Actually, outside of some of the Putrevore, Revolting, Ribspreader and Paganizer material, which I'm quite partial to, The Grotesquery is one of Johansson's strongest acts.

Now, I'm on record as never having been the biggest Massacre advocate, finding them average at best even when their style was a novelty. Far less interesting songwriters than Death, Pestilence or Obituary of the time, with an air of 'me too' written about them in the miasma of early Earache, Metal Blade and Nuclear Blast signings. They were also later responsible for Promise, one of the worst fucking records ever recorded by a death metal band in history, or ANY metal band, for that matter (I've certainly scored that abomination lower than every studio record other than the Hellyeah debut). Yeah, I know it's an anomaly and half the band either denies taking part in it or wants very badly for us all to forget it out of existence, but you can imagine I just don't approach a Kam project with a lot of high expectations. To be fair, it's not because of 'Master' K. Lee's vocal prowess (with that one exception). He was fine on the first Massacre disc as well as his stint in Denial Fiend, and in truth his personality is a large part of what makes Tales of the Coffin Born an enjoyable experience. Ghastly guttural growls with a lot of gut-saturated sustain, balanced off against a higher pitched snarling voice that very often felt like Deicide if not so closely conjoined. He's also got a gruffness that resembles Rogga himself in some of the bands he has growled for.

Musically, this is a total old school hybrid of American thrash-influenced songwriting aesthetics reminiscent of bands like Massacre, Malevolent Creation and Deicide with the meatier Swedish tone inspired by the usual suspects who influenced many of Johansson's other projects. Brynjar's bullet train double bass builds an undertow beneath the largely mid-paced material comprised of a lot of primitive tremolo picked riffs, palm muted chuggery and few craftily carved open chord sequences. A few of the grooves felt like faster Bolt Thrower, but the major difference is all the sampling and 'narrative' stuff used in the songs, from faint industrial clanking to cheesy intro monologs that set up the tunes proper. Although I mostly enjoy this, there are absolutely a number of pretty generic rhythm guitar progressions like the lazy groove in "This Morbid Child" that simply feel too familiar to stand behind. The Lovecraftian horror which spurs on the lyrics isn't exactly represented with a lot of interesting musical ideas, though I'd say Rogga gets into it in a more complex, varied manner than many of his bands, with a goodly number of riff shifts, and a badly needed bit of lead and melody work.

The bass lines sound tight with a plodding tone, some squirmy fills, and as mentioned, the drums are executed with robotic accuracy, but not in a bad way... they simply sound flawless and voluminous in both the kick and snare-work. Like the recent outings of Paganizer or Ribspreader, The Grotesquery really goes for a deeper end effect that stirs your entrails as if by a spoon in a cauldron, but there's also a lot of studio clarity here that won't turn off fans of more contemporary, technical death metal who don't require it to sound as if it was recorded in a cave in 1993. Tales of the Coffin Born isn't terribly eerie or compulsory like its lyrical subject matter, so don't expect the slowly building terror of a Lovecraft tale to translate itself meaningfully into the song structures. It's more of a brutal and clinical sort of old school modernization that just happens to target a more eloquent brand of horror than the usual misogynistic gut-spilling. Aesthetically there have been dozens of other records on which the music and lyrics fit better together, but just on its riffing, vocals, and production alone, Tales of the Coffin Born is a really solid effort that holds up across a number of listens. You might not remember the album long after spinning it, but when engaged in the neck straining experience itself it won't let you down, especially if you're a sucker for old Massacre, Cancer, Bolt Thrower, Jungle Rot, and the like.