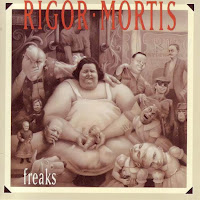 The 'deformed' and the 'defective' have always had a safe harbor in the horror genre, playing to the superficiality and commonality of the viewer. So, naturally, this was fertile terrain for Rigor Mortis to continue their tour of transforming classic/cult horror concepts into intense onslaughts of hyper thrashing proto-death metal. I admit to having some trepidation that the band might abandon Mike Scaccia's noteworthy tremolo picking style and prowess for a chunker, more accessible brand of mosh-thrash of the Anthrax variety, but thankfully this was a pretty direct descendant of the eponymous 1988 effort in terms of style and songwriting. I felt next to no disappointment at this fact, but I have to say I'm not of the general consensus on the Freaks EP: its loyalty to the patented Rigor Mortis sound is noted, but for whatever reason the songs here simply do not phase me like most of their predecessors.

Hell, Rigor Mortis was arguably one of the better 'second tier' US thrash records to hail from anywhere other than the East and West coasts, due largely to the guitars and vocals, and I'd even go so far as to say it had a profound if subtle influence on future decades of extreme metal. Many death and black metallers I've encountered have never even heard the thing, but there were not a lot of speed or thrash acts at the time playing with the acrobatic picking technique quite like Scaccia. In fact, I'd say he was so far ahead of his time that most extreme metal groups today don't even compose their tremolo lines with such fervor...he can twist them into a groove, bolster them into a lead sequence and could truly explore the concept of 'speed' itself. I guess without the blasting and constant double bass patterns so critical in the evolution of death and black mediums, Rigor Mortis might be taken slightly for granted while Gene Hoglan and Dave Lombardo are forever lauded, but surely Harden Harrison is a wild bastard playing on the more aggressive end of the thrash spectrum with loads of near-blast beats, constant fills and even having some fun with a cowbell, appropriate to the track "Cattle Mutilation".

The vocal position here had shifted from Bruce Corbitt to a guy named Doyle Bright, and while he doesn't have that same darkness to his bark, he does a pretty vicious impressive mix of Corbitt and other thrash frenzies like Ron Rinehart of Dark Angel. Casey Orr's bass lines here are perhaps the only department in which I actually consider Freaks a step-up from the debut. Sure, the guy's not going to receive the same level of attention as Scaccia, but he is literally fucking flying along those notes, and the relative thinness of the rhythm guitar in the mix ensures his constant presence and mildly muddled tone. Rigor Mortis is at its core about velocity; endless momentum, and this EP is no exception. It's produced cleanly and efficiently, with the vocals barking the loudest, and leads also blaring, but the rhythm instruments each playing off one another seamlessly. This is drag-strip horror metal, with exponentially more tremolo patterns than chords, and even at its slower points like "The Haunted" its still bustling along with great confidence and exploding squeals of guitar notes that dazzled just about every guitarist in the 80s that heard them, yours truly included.

Unfortunately, at least for me, the songs here simply do not have the resonance that gems like "Wizard of Gore", "Bodily Dismemberment" and "Condemned to Hell" from the debut had. I bought this when it was released and quickly forgot about it, perhaps because there was just so much better coming out at the time. In the intervening years I've gone back to it several times, but to the same underwhelming reaction. I find it nearly impossible to remember any of the riffs and notes, because honestly they're a little dull by comparison to their forebears. It's 'high speed boredom', to be sure, but pretty much victim to the same reasons a lot of death and black metal records won't gel with me decades later: lack of inspired, original, and evil patterns of notation that glue themselves to the memory and never un-stick. Tunes like "Freaks" and "Cattle Mutilation" might be perfect for fans of premature ejaculation, who just want something fast and mean and to get the whole experience over with, but there are never any interesting twists or licks waiting in the depths, apart from surface recognition of the members' dexterity. I never feel like the 'knife is in my hand' as I did with "Bodily Dismemberment". I don't feel like a psycho anymore when I hear this. It all comes down to that.

Hell, there's actually nothing 'freaky' about any of this if you've already heard the debut album. The songs here just seem like outtakes that weren't catchy enough to include among their betters. Rhythmically there aren't many interesting progressions, and hell even the "Six Feet Under" instrumental seems like a warm up exercise for the musicians with a little too much repetition. The lyrics are alright, and Bright's presence can hardly be held responsible for the lack of compelling songs (at least on this release), but I felt like Mike's note choices here felt a little dry; and thus I didn't hold out much hope for the inevitable sophomore Rigor Mortis vs. The Earth, which in addition to the lamentable songwriting, likely suffered from the 'thrash fatigue' of the early 90s and the fact that the band had been kicked to their third label home in three releases. Freaks is certainly superior to that, but it's just not that exciting beyond its visceral construction. Yeah, it's faster and arguably 'sicker' than Haunting the Chapel or The Eyes of Horror short-players, but there are single songs on those ("Chemical Warfare", "Confessions", etc) that stand out more than all 5.5 of these cuts combine. So, back on the shelf it goes, not nearly the curiosity that Mark Ryden's cover image suggests.

Verdict: Indifference [6/10] (hide your disgust as they greet you)