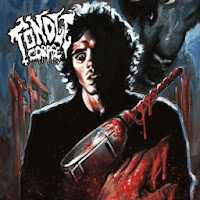 Unsung paragons of sleaze and gore, Dutch Fondlecorpse is amongst the most kitschy, campy horror metal acts you're like to encounter on the European side of the Atlantic. Known just as much for their ridiculous collage artwork as their music, albums like Blood and Popcorn and Creaturegore go so far as to feature the goddamn Critters from the Critters film (1986) in amongst the garbage, gore and tits! Try and strike that from your mind...a little harder to do than the songs, which up to this point haven't exactly left me with much of an impression, other than their jubilant use of movie samples. But let's be real: Silvester Koorevaar and the musicians he surrounds himself with are hardly out to rewrite the script on extremity. They're not meticulously penning the spiritual successor to Individual Thought Patterns or Unquestionable Presence, or trying to blast past Origin at some chainsaw murder-derby. Fondlecorpse writes fun, goofy, semi-sloppy death metal meant to help you relive those memories of cracking a beer open in the 80s, kicking back with some of the worst VHS tapes in your collection and just reveling in the triviality side of extreme entertainment.

This Set the Drill to Kill CD single is actually half of a limited vinyl split the band released with the prolific Swiss goregrinders Embalming Theatre, but this particular version includes the sample attachments that were omitted from the 7". Just two songs, but the reason I chose to dive into this rather than one of their older efforts is because Silvester has acquired more or less an entirely new lineup here, including none other than the Swedish underground death metal guru Roger Johansson on the guitar. As a result, I found the riffs here to be a lot tighter and more explosive than, say, Creaturegore, and that's partly a reflection of Rogga's vast experience releasing dozens of records in nearly as many bands over the last decade. If I didn't know better, I'd say Fondlecorpse was making a legitimate run here on becoming a tight and reliable throwback death metal band with a mash-up of Scandinavian and American influences, sort of a middle ground between Death and Dismember helmed by Silvester's gruff gutturals and off-snarls. The guitars here are a grab bag of driving D-beat punk-based rhythms and more intricate tremolo patterns, occasionally conjoined with a simple backing melody, or interspersed with some peppier thrash licks. Admittedly, though, I actually preferred "Rampaging Malformed Monstrosity", which I found the more brutal of the pair.

A great, athletic bass tone and loudly impacting drums help to round out the riffage, to the point where the group can run head to head with the tireless crusade of Swedish death metal impersonators, even though this has the lighter camp appeal that's going to find favor with Razorback Records fans (a brand Fondlecorpse has released material through and Silvester often does the artwork for) or Spanish goregrind heavies like Machetazo, Gruesome Stuff Relish and Haemorrhage. There's certainly also a little of that trickle-down influence from Carcass, Repulsion and Napalm Death, but it's distilled here into something a bit more recognizably 21st century. The samples are pretty sweet, I recognized the first from Driller Killer (1979) which should be obvious, but not the second. I also really dug the artwork on this thing, a nice tribute to the film. As for the songs? Well, even with the band firing on their best production cylinders, these are the sort of tunes you might listen to once or twice, maybe include on some schlock horror/gore metal compilation, but they're not exactly composed of memorable riffing sequences that stand out among so many peers. Not really on the level of, say, some of Rogga's more prolific bands like Revolting and Paganizer, but really there's nothing 'bad' about this release, it just doesn't stand out much. It's got an attitude, just not a very distinct or unique one. If you're really into this cult horror/exploitation stuff, especially the Razorback roster, it might be worth it to kick a few bucks for something that could prove a collectible later on (though the vinyl split might seem a more substantial choice for purists).