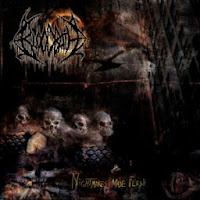 Had you asked me a half decade ago, Resurrection Through Carnage would have been the Bloodbath record I championed as my favorite; but in the ensuing years I've found myself listening more and more to its predecessors, both of which exhibit stronger songwriting chops and a fraction more technicality that help to maintain interest. What's more, with Nightmares Made Flesh the Swedes seemed to transform from a 'supergroup homage' to an example of consummate professionalism in the field of death metal nostalgia. As overt as the influences are, many hailing from their very own country, with this album and its successor, I never really had the feeling that Bloodbath were perpetually 'living in the moment'. Unlike a lot of other throwback stylists, Nightmares Made Flesh doesn't feel like they're writing a record for 1993. It feels like they're writing one for the 21st century, which just happens to follow an 'ain't broke, don't fix it' mentality. Hell, by 1993, most of these guys were already putting out music...

This is better refined musically than its predecessor, which was far more of a chunky tribute to Swedish death luminaries like Entombed, Unleashed and Dismember. There were a lineup difference in that the band hired on Hypocrisy main man Peter Tägtgren to temporarily fill the shoes of Mikael Åkerfeldt, who was intensely busy with Opeth at the time; and Martin Axenrot (Witchery, Satanic Slaughter, etc) came on board so that they could have a full-time drummer, Dan Swanö focusing more on the guitar. These changes don't exactly factor into why I enjoy this record more, but certainly I felt that Peter had a better flexibility in his delivery than Mikael, even if his deep growl isn't quite so opaque and caustic. The riffs here are in general a little more frenetic and occasionally higher pitched in nature, and with Hypocrisy's diverse catalog and Peter's experience also in Pain, The Abyss and other projects, I can't think of anyone else more qualified to incorporate into ANY extreme musical project, even on the fly. Ultimately, I enjoyed his presence here more than Åkerfeldt on Breeding Death and Resurrection Through Carnage, but when Mike returned for The Fathomless Mastery, I wasn't exactly disappointed. Really, this shit isn't rocket science, either of the men could handle it, and Bloodbath is more about the riffs anyway.

Which is, of course, where this particular album excels. And there was no excuse for it not to, with two of the best songwriters in the country, Blakkheim and Dan Swanö laying into some corpulent grooves redolent of their peers in the 90s. Heartwork-era Carcass is a solid comparison, laced with the driving overtures of Entombed or Soulless-period Grave, and even culminating in a few individual riffs which feel like they could have been lifted off these bands' cult classic offerings. You can also here some slower Entombed or Bolt Thrower during the few sequences that reference death/doom on the latter half of the album, or even traces of latter-day Death in a few of the more clinical, busy note progressions in pieces like the opener "Cancer of the Soul". But Bloodbath is not beneath grafting a little creative editing of their own onto the style's blueprint, and so you end up with absolute fucking killer guitars like the tremolo picking sequence initiating "Outnumbering the Day" or that incredible, to-die-for d-beat beatdown groove in "Year of the Cadaver Race", which rivals almost anything on Clandestine or Wolverine Blues. I can't say that all of the guitars here are equally as ass-throttling and inspired, but you won't encounter a long, dry period without something entertaining...and across 12 tracks, that means quite a lot of fun.

FUN. Like, invigorating in that way you might have felt when first hearing the supergroup's ghoulish forebears during the actual 90s (if you were alive or of age to do so). But Bloodbath aren't just old hats and writing good songs, they've created an album here with timeless production values, clean enough to sate the fan of more modern/brutal death metal but still packing plenty of punch for the old timer. There's a reason why a lot of younger death metal fans I've come across, who seem to have little tolerance for the decades-old classics seem to be quite fond of this group even despite the lack of brain-spinning technicality they're accustomed to, and that once again points to the Swedes' decision to smooth out some of the grime and not shoot for the 1991 tape-reel production. Loud, pumping rhythm guitars warm and polished enough to wallop you with the deep end, but still very clear when they're racing off into some more intricate, melodic picking. The leads are also very well-defined, ripping and evil, the sort that fire up the excitement level well beyond what is already being played. That's another thing...most of the tunes here sound positively diabolic, due to the craftiness of the riff construction!

Fuck, these are all pretty mainstream dudes in Swedish metal who have broken big with softer acts like Katatonia, Pain and Nightingale, safe to play in front of your grandparents; so the fact that they can churn out wicked and imposing riffs better than the lion's share of 3rd generation Swedophiliacs the world over speaks volumes about how in tune they are with their backgrounds that inspired the project. For a project that's not even meant to be serious, the music here is molded with more passion and effort than you'd expect, and apart from a few lyrics (arguably), there's nothing so explicitly silly about this band. They don't saturate the songs' varied, visceral themes in the most disgustingly descriptive lyrics you get out of the competitive gore bands, but a tune like "Eaten" still makes me squirm a little in how it depicts cannibalistic desires from a perspective you normally don't experience. Or how about "Year of the Cadaver Race" in which undead livestock exterminate humanity. Eww! Truth be told, Nightmares Made Flesh is the total package, the sort of album you'd be proud to own had it come out 10 or 20 years prior, and proud to own now. I realize there's a small minority that will balk at the band because of its members or because retro death metal is utterly uncool, but if Bloodbath had arrived in 1992-4, the poster would very likely be on those same folks' walls, the tees proudly outgrown but displayed in their closets or carved into back patches for that inevitable midlife crisis when the khakis come off and the HORNS ARE THROWN.

So yeah, I have a great time with this record, but it'd be unfair to not point out the few deficiencies. For one, these riffs don't hit with a 100% success ratio, even though there's not really a noticeably 'weak' track over the dozen. A lot are just paraphrased from a few dozen of the obvious influences, from Morbid Angel to Entombed, so when you hear the truly amazing progressions (including those I mentioned earlier), they tend to really stand out and make you wish the rest were quite as great. Also, Jonas Renkse's bass playing, while loud enough, is dubiously dull and noncommittal. I know he's also involved with some of the guitars, backing vocals and overall songwriting...and that a lot of old death metal records don't themselves involve compelling or noteworthy bass playing; but a band like this which isn't thinking entirely in reverse could take an extra few days to pull up some half-decent lines and fills, which are treacherously few here. Otherwise, this is an album I can crank nearly a decade after its release date, inspired by material a decade older still, and it just feels timeless and engaging, despite its lack of novelty. A slab of semi-sickening, confident concussion for those who approach it from either the horror or headbanging angles.