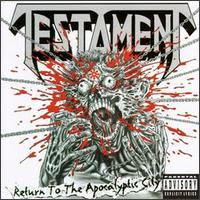 A number of West Coast thrash acts in the late 80s/early 90s decided to test the waters of a live recording through an EP rather than a full blown album release, and Return to the Apocalyptic City was Testament's second entry into this club (the first the obscure Live at Eindhoven EP from '87); a half hour of material put out through Atlantic Records to turn a few dimes and keep the fans' blood thirst quenched between The Ritual (1992) and its follow-up, Low (1994). Sadly, though this EP attempts to provide the fans a variety of content to enjoy during their downtime, it falls well short of an essential purchase, and those seeking a more substantial live offering from Chuck Billy and crew should skip directly to the following Live at the Fillmore.

Granted, the four live cuts that represent 66% of this release give an adequately pummeling, with a lot of punch to the guitars, brute vocals, audible drums, bumping bass, and that threatening, oblique atmosphere the band had mastered through the first few studio albums manifest at the Los Angeles Palladium. Really can't say I'm disappointed with the performances at all, especially "Over the Wall" and a personal favorite, "Disciples of the Watch", but when all is said and done, there are just too few to effectively boil the blood over to satisfaction. It's important to note that this was not performed with the entire original lineup; Chuck Billy, Eric Peterson and Greg Christian were joined by their Forbidden friends Paul Bostaph and Glen Alvelais to round this out, and both do a solid job of filling out the estimable shoes of Clemente and Skolnick. Overall, the performances are effective and strong sounding on a stereo, I just wish there were about a dozen more here..

Return to the Apocalyptic City also includes a useless radio edit of "Return to Serenity" (I like the song, but trying to compact an already accessible piece for radio reeks of major label bullshit). The most exciting track here, though, is very likely "Reign of Terror", a track they had back on their demo that they'd continued to perform through the years, winding up on the Trial by Fire single. It's a decent, forceful piece with some great, hoarse assertions and screaming from Billy, but I'd say it often sounds a bit too much like a pastiche of other tunes off The Legacy and The New Order and I can understand why it was never represented  officially on one of the studio albums. Does it warrant a purchase of the entire EP? Not so much, and the fact that there are no other rarities here speaks once again to the very 'meekness' of this release. Most likely those who acquired this did so at little personal cost, I can remember it wading through the cut-out bargain bins back in the 90s, and if you find it dirt cheap and love Testament, have at it. Otherwise, there's not enough of anything on offer here to really bother with it.