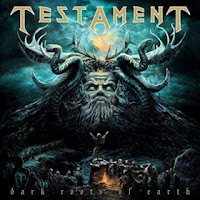 Testament's last full-length The Formation of Damnation had an incredibly divisive response from the band's audience and critics, some lauding it for its muscular, modern reconstruction of the band's 80s atmosphere and riffing aesthetics, others despising it for...well, basically the same reasons. I happened to really enjoy the album, and it still earns an occasional rotation in my these several years later, in particular the more memorable ragers like "Henchman Ride". This time out, however, the band has admittedly offered up a more varied selection of material that might quell some of the naysayers, along with one of the better cover image furnishings they've used to date, and lyrical themes that embrace the plight of Chuck Billy's Native American heritage.

Frankly, I'm surprised that this wasn't used as the central concept for an earlier album, so Dark Roots of Earth seems like an idea whose time almost overdue. Thankfully, Billy does a pretty knockout job of it without overstepping anyone's sensitivity. Though the lyrics are often too simplistic and cliche ridden, one can tell there's a serious personal investment in a piece like "Native Blood", and most of the songs cover a more broad spectrum of sociopolitical unrest that most of us can probably relate to, regardless of our color and history, par for the course when one glimpses back through even the earlier Testament records like The New Order, Souls of Black and The Ritual. I've read a number of the usual ignorant flailings about how this album is the 'true return to form of their 80s work' or whatnot, but these are laughable, as anyone having listened to the prior full-length would have recognized the various cues and riffing progressions that hearken straight back to the band's 1987-1992 period. In fact, despite the broth of familiar note formations that this is boiled in, I found Dark Roots of Earth mildly more experimental, to distance itself a little further.

Which is both a boon and a curse in this case, because while most of the vocal lines are pure Billy, the requisite haughtier Hetfield timbre the guy's always been known for, I found some of the call and response vocals, like the chorus of "Rise Up", or the almost rapped, tough guy inflection during the bridge of "Native Blood" itself too feel silly among the gravitas of the music's message. Dark Roots of Earth doesn't exactly start out on a strong foot, since "Rise Up" feels so decidedly average, and the power ballad "Cold Embrace", molded in the vein of something like "The Ballad", felt redundant. Otherwise, most of the core cuts are quite solid, pieces like "True American Hate" and "Man Kills Mankind" offering some exhilarating passages of menace that often hinge on melodic death metal, while not abandoning the more guttural inflection Billy had begun to adopt more heartily on albums like Low and Demonic; and "Throne of Thorns" is simply majestic with its gallant, surgical melodies. There's no unified sense throughout this disc that Testament are just resting on their laurels (which, to a degree, the prior album was somewhat guilty of). You get hints of the past, but also that they incorporate anything they feel will service the song.

It helps a lot that this album sounds so damn huge, with a meaty, polished rhythm guitar tone which faithfully emulates the band's 'legacy' without constraint. Greg Christian's bass is fat and lumbering, especially when he's alone as with the intro to "A Day in the Death", but you can always hear him rupturing along beneath Peterson and Skolnick's chugging butchery. Gene Hoglan has returned to Testament for this record, and his presence is likewise felt, obviously restraining his limitless ferocity to what matches the writing, but he's got plenty of great fills and sounds just as strong in this child's play as his more incendiary performances. Best of all, though, would be the leads, which are without exception well-structured and interesting, branching out from the excess Skolnick has employed in the past to showcase his jazz chops. They're not always the most complex of passages considering the talent involved, but they add to each track, rather than the seemingly useless fretboard exercises that plague a lot of thrash (past and present).

I'm probably in the minority that will enjoy this record less than its predecessor (just like I was in the minority who didn't think Overkill's Ironbound was the second coming of thrash-Jesus), but I've already found that after a dozen listens its charms have begun to wear thin. The musicianship is spot on, and I appreciate that they went for a broader approach to the writing, but there are honestly only 3-4 songs here I feel repeatedly compelled to visit. I found the bonus covers a mixed bag, with Iron Maiden's "Powerslave" adhering more closely to the band's pummeling prowess than the sillier takes on Queen's "Dragon Attack" or the Scorpions' "Animal Magnetism". That said, as proof of Testament's sustained viability in the modern thrash market, Dark Roots of Earth is more than adequate. Anyone would be lucky to be writing at this level 30 years into their career, and Bay Area purists who enjoy bands like Warbringer, or the newer Exodus records will break their necks off and feast their hearts out to its swarthy sounds.