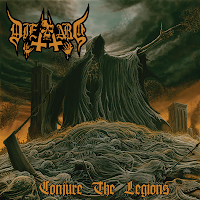 Another of Sweden's myriad masters of hybridized thrash, death and black metal aesthetics, Die Hard surprised me a bit with the level of production values they exude here. The primary influence is obviously Venom, and they've even taken their moniker from one of the UK fiends' track of the same name, but where many bands following in such footsteps attempt to mimic the crude and brash atmosphere of Black Metal, Welcome to Hell or the classic Scandinavian black records, this trio operates under fairly professional standards. While it's not the most memorable batch of tracks in this niche with regards to the songwriting, I must say that the sophomore Conjure the Legions at least sounds quite good bursting from the speakers.

Essentially you've got classic speed metal and punk riffing motifs coursing through the entirely of the album, but often imbued with a harder, pure thrashing edge that is drawn from Germanic inspirations like Sodom, Kreator and Destruction. The tone of the guitar is quite forceful and bold here, the dominant force in the music, supported by some strong, flexible drumming, and saturated, simplistic bass-lines that further invoke the primacy of the bands' listening roots. Vocals are certainly patterned on the Cronos blueprint, but there are also harsher, revolting barks and grunts redolent of Hellhammer/Celtic Frost, and a sort of ghoulish, desperate abandon that recalls King Fowley of Deceased on an album like Fearless Undead Machines, or Rick Scythe of Chicago's late Usurper. Not the most abusive or nasty of inflections, but plenty of effort is spent on its brute bluntness, echoing out over the central muscle of the riffing. Die Hard also keeps the material and momentum varied through the album, shifting between faster speed/thrashers like "Masters of Deceit", "Satanic Uprise" and "Robe and Crown" and mid-paced punk busters like "Cold Scythe".

Where the album suffers somewhat is in its obvious chord/note progressions, none of which will surprise or offer anything unexpected to long-term listeners of the style. You'll know where each sequence is headed long before the band gets there, and a lot of the titles and lyrics read like all too common fare among the band's peers and influences. A handful of riffs rise above the din, and the leads are well scripted; the vocals also do their best to up the ante, but I wasn't hearing the sorts of hooks that continuously draw me back to an album of this type. Granted, I doubt Die Hard wrote this with the intention to reinvent the form, but a black/thrash or death/thrash album with a reaper on the cover (even a good looking one) and a stock selection of riffs still seems to me a fraction too familiar. Redundant, even. It's a passionate performance, but never a sinister one. That said, the Swedes clearly have a competent grasp on this material, and if your poisons include groups like Witchery (the earlier records, when they were good), later Impaled Nazarene, Cruel Force, Desaster, or the Venom reunion efforts with bolder productions (Cast in Stone, for example), you'll want to at least give this a try.