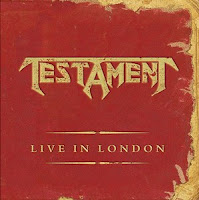 While Live in London is technically the 'fourth' Testament live release (if we're including the EPs), and my patience seems to draw thinner each decade of a band's existence in terms of purchasing such items, I have to admit that it's by far the best. Not only because it features the original lineup of the band on fire, tearing through the greatest material of their career (1987-1992), but because no one has been able to capture their stage sound quite so fully and menacingly. These are the studio songs you love, given ample girth and power, and providing a dream gig for anyone who has, for whatever reason, constantly missed them when they came about on their numerous tours...

Issued as both an audio CD and DVD presentation, this and the following 2008 full-length Formation of Damnation provide an excellent 'second wind' for the Californians' career. Every track in this set is a classic revisited, with a relatively even distribution across the the first five albums (even The Ritual getting some love with "Electric Crown" and "Let Go of My World"). The guitar tone is crushing, with mighty palm mutes and dynamic breadth that sound superb whether the band is chugging along at mid pace or engaging one of their older school barrages like "Into the Pit". The drums are deep and haughty, the bass just as prevalent as on any of their studio records, and what's more, Skolnick is a living frenzy throughout, his leads exciting and one has to wonder how these two camps ever survived without each others' company. Chuck Billy is great, as every time I've ever seen him, putting a slightly meatier spin on the vocals than the old days, if only because Testament has wisely decided to not to entirely abandon the influence of their heavier records like Low and Demonic. Fine by me, since I've never had much of an issue with either.

I worship the sheer magnitude of the band's sound here, with the crowd hiss casually blanketed over the instruments to remind the listener where they are, without ever obscuring the musical delivery. There are a few moments of gang shouts or transitions where they don't seem quite as tight as one could hope, but these are rare enough not to mar the overall experience. Obviously, if given the choice, I'd say to go for the DVD over the CD if only because that visual element is important to 'being there', but even as a standalone this destroys Live at the Fillmore, Return to the Apocalyptic City, and the reissued Live at Eindhoven 87. Finally an engineer had done right by this band, and thanks to a near spotless performance these mighty and magnificent tunes are given their due. "Raging Waters", "Trial by Fire", even "Souls of Black" sounds superb, even with the smokier vocals. The one Testament live you can feel great about dropping some coin on, even if it's not the simplest to find these years.