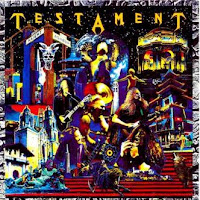 Live at the Fillmore was the first proper live album from Testament, disregarding the two previous EPs which had about 9 tracks and 45 minutes of material between them, and though it has a few flaws stunting it from a position of 'mandatory' in their catalog, it's nonetheless a fairly substantial release with 14 live cuts and 3 'unplugged' studio tracks as an added bonus. Some might find it bittersweet that this is once again not the legendary lineup of the 80s (you're only going to get that with Live at Eindhoven if you manage to hunt it down), but then again, James Murphy and Jon Dette could hardly be considered slumps with their respective instruments, and they do their damnedest here to present even that material to which they weren't 'native'.

As for the set list, there's an appreciable mix of tracks from the first four albums and Low, with The Ritual absent altogether from the live majority of the release. As much as I love that album (it's probably my favorite in the band's career), I think I can understand its lack of presence: the band had just toured on that album and wanted to focus on their newer material, and it suffered from a divisive reaction from their fan base. That said, the material presented here is varied and rounded enough, from "Hail Mary" or "Low" back on into the essentials "Alone in the Dark", "Apocalyptic City", "Eerie Inhabitants" and "The Preacher", to name a few. It's paced out well, generally heavy as fuck, and one of the more interesting components for me was hearing Murphy performing in Skolnick's stead on pieces like the instrumental "A Dirge". That said, there were times through the album where I felt the levels were a little shaky, in particular the panning of the guitars into my 'phones has always seemed to leech them of the charging power that was present on even the live cuts from Return to the Apocalyptic City, and it gets much worse for lead/rhythm guitar sequences.

The drums sound a bit snappy and plain, also, and everyone in the band seems almost as if they were performing from a separate stage. I did enjoy Billy's added aggression here, his 'death metal' gruffness even applied more ferociously to the earlier songs (though it was the status quo on albums like Demonic or Low). There are also a number of notable glitches, especially in the rhythm guitar where the music just doesn't present itself with the same force and solidarity as the studio output, but that's no easy task for a live record, and to some extent it can be forgiven. As for the 'acoustic' studio pieces, they basically take some of the power ballads from the prior albums and then drop the electric guitars. "The Legacy" and "Return to Serenity" certainly don't suffer from the treatment, but I found "Trail of Tears" bland outside of the leads. Nothing impressive or effective, really, but then at least they threw these onto this record rather than trying to put out an MTV Unplugged with Testament.

Honestly, as someone waiting a decade for this to finally happen, I was a little underwhelmed by Live at the Fillmore. There's plenty of content, and the live performances don't sound 'bad', per se, but this is just not one of those amazing thrash lives which begs to be in your collection (like a Live Without Sense). I have no problems with the track selections, and considering Murphy and Dette were still pretty new to the band, the performances were adequate, but it's not something to pay import or EBay prices for.