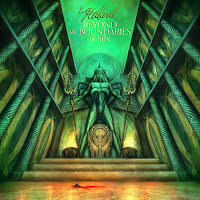 While I wouldn't count myself among the hugest of Manilla Road proponents in the universe, there was definitely a stretch there from about 1983-1990 where I found the band was writing some of the most compelling underground metal in the Midwest. Mark Shelton and his associates were never afraid to break boundaries, traipse across specific sub-genres, explore and flesh out themes fantastic, mythic, Mythos, or historical in the contexts of traditional, power, heavy, doom and thrash metal. There was nothing inherently cheap, shallow, or predictable of that outfit: when I first pursued a Manilla Road record, I had almost no idea of exactly what awaited me under its eaves. It was an adventure, and there were just not many bands you could say the same for...that said, I've had a mixed reaction to much of the Kansas group's 21st century material.

The Hellwell debut might very well have been released under that moniker and not surprised anyone, due to the eclectic niche-bending Shelton so defined through the 80s, but there are a few quirks and differences to set it apart. For one, there are a lot of gutturals spread among his unnerving, deep, nasally clean vocal range. The riffing patterns often exhibit a tendency towards the dark thrash epoch of Manilla Road, but balanced against the heavier, progressive grooves of the guitars, it seems pretty unusual. Also, the prominent use of organs give this a very psychedelic, progressive feel redolent of 60s and 70s influences, thanks to fellow composer E.C. Hellwell, whose handle provided a name for this outlet (and who was also on the latest Manilla record). Not necessarily something entirely new to Shelton's past albums, but here it feels specifically retro. A death/doom metal Doors or Deep Purple? Why not. Another distinction of Beyond the Boundaries of Sin is how the raw production and the constant collision of busied riffs and leads give this the impression of an almost improvisational power trio; perhaps there's too much structure for a 'jam' band, but no effort was spared in flooding the listener's senses.

Most importantly, though, these often disparate elements are concocted into a genuinely creepy experience that reeks of classic horror concepts, both Gothic and otherworldly. Where the barrage of demented heavy doom licks transcend into these hugely atmospheric twines of Shelton's soaring premonitions and backing organs, like in the bridge of "Deadly Nightshade", you certainly can feel the walls of sanity torn asunder, and the age old chills of Poe, Lovecraft or Arthur Machen beginning to leak into the contemporary world. The leaden rhythm guitars riffs are crunchy as hell, the leads are constantly cavorting through the upper range of the album in fired bursts of controlled chaos, and though melody is not lost upon Hellwell, its really the sense of swirling bombast that carries the trio through its manifold rhythmic diatribes. As archaic as it might often sound, Beyond the Boundaries of Sin isn't something that was fully conceived in a single afternoon, it's not resting entirely on its Manilla Road laurels; it's the shaky first cobblestone on a fascinating new path for this trio.

Still, I wasn't always sold on the music here, if only because a lot of the rhythm guitar riffs and leads seemed forgettable despite their good intentions. If separated from the keys, vocals and drums, I doubt I'd find them all that interesting, and my ears always sought something to stick onto. The solos are solid exercises that help lend the music a frenetic, reflexive tension, but in of themselves they lack emotional resonance beyond the mere climb and descent of scales. I found that most of my favorite moments were the most grandiose, like the epic, psychedelic escalation of "Acheronomicon III: End of Days" through the burn of synthesizers to the sweeping, bright atmospherics of the crushing chords and organs; or the aforementioned "Deadly Nightshade". While I often enjoy the primal production of certain extreme metal for its own sake, here I actually wouldn't have minded another layer or two of finish to really flesh out the instruments. Imperfections aside, though, Beyond the Boundaries of Sin is an interesting mutation on the established Manilla Road aesthetic. If you like one, the other is a safe bet. Inspired, intelligent, demented, lyrically curious, and I hope not the last we'll hear of the project.