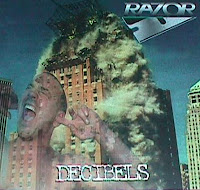 As lame as it looks (even compared to some of Razor's other cringe worthy cover images), Decibels continued the band's methodical devotion to destruction, a pure urban thrasher much in line with the albums before it. I must commend once more to the Canadians' unswerving flag waving for their genre. They really 'took that torch' and ran with it to the very end of the trash, making a mockery of all those better known acts who sold themselves down river through the 90s. Razor embraced thrash, personified thrash, and never compromised itself, even enduring the six year studio hiatus post-Open Hostility to emerge completely unscathed! A miracle after nu-metal and groove bullshit had begun to dominate the field.

That said, Decibels is sadly the worst of the band's albums for a number of reasons. One of them is that the riff patterns coursing through it were already seemingly redundant in 1991. There are a few bands out there who can press on with largely the same shtick for decades and still thrill the ear (Motörhead, for one), but alas, this album feels like an also-ran from the starting gates. There are a few modern tweaks, primarily in the meatier guitar tone (than the prior two records), and the use of effects for Bob Reid's vocals, which come across more distorted than they were in the early 90s. For example, in "Jimi the Fly", he sounds like he's doing an Alain Jourgensen (Ministry) impression, and it's distracting. They also try their hand at a melodic chorus or two, like the close of the title track, with its eerie, lower-ranged choir, or the backing harmony in the bonus "Instant Death". Not a bad touch, but unfortunately it just doesn't excuse the riff set beneath from being so bland. There are a few catchy leads strung through the album in tracks like "Jimi the Fly", but the rhythm tracks actually seem spotty and muddy at times, and a few sequences in songs that could have used better vocal placement are left dry.

In addition, several of these songs lope along like retarded circus elephants unaware of what they should stop upon, or where they should be stepping. "Great White Lie", for existence, with its banal muted plod; or "Nine Dead", which sounds like its just been stripped out of another Razor song and slightly re-arranged. If I totaled up every passable riff on this whole album, I might have one song. It's so underwhelming, that I have to ask myself, despite my earlier praise at the band's loyalty to its sound, whether some progression might have been necessary to keep the Canadians afloat for a more prolific body of work in the latter half of that decade, and the 21st century. As much as I love Executioner's Song, Evil Invaders and of course Violent Restitution, I don't think it would have hurt them to start thinking more technical, or using different guitar arrangements than just the first impulse which came naturally to Carlo's mind. Beyond this, I also felt like the drums on this album were too snappy and mechanical, I realize there's supposedly a live person doing this but they're nearly as calculated and uninteresting as on Open Hostility.

In the end, while it was great that Razor were re-affirming their existence after such a long break, Decibels just doesn't feel as if it needs to exist. It's like a bunch of b-sides for Open Hostility that weren't up to snuff then, but dowsed in a weak production with a few new ideas implemented. It's also not a strong note to 'end on'. I realize the band has continued to gig and appear sparsely through the years since, but they haven't exactly been productive enough to release anything since...strange, considering that with the newfound popularity of thrash nostalgia, many a label would have snapped them up in the 'oughts. Now, before you go crying about what an insensitive fuck I am, I do realize Dave Carlo has since been diagnosed with oral cancer in 2012, and I wish him all the best. I'll say flat out: he is one of the most consistent and influential guitarists in all the thrash genre, and I hope for a swift recovery, and maybe some unfinished business in the studio.