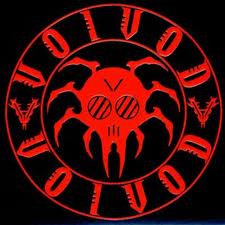 Voivod was a heavily anticipated album for me, because despite having mixed feelings over Eric Forrest's tenure with the band, they were still (and remain) one of my all time favorites, one of the groups that formed my fundamental appreciation of the potential in music for positive growth and progression. As it turned out, once the Canadians returned after the six-year gap from Phobos, they would launch one of their highest profile campaigns yet. Though Snake had returned his rump to the vocal seat, the band had yet to attract Blacky back into the fold, so they did the next best thing: hooking up with one of the most famous bassists in all the metal genre, Flotsam & Jetsam/Metallica alumni Jason Newsted, who as it turned out, was a long time fan of Voivod. This also no doubt helped them secure a second stage spot at Ozzfest 2003, though I can hardly imagine the unwashed, wallet chain armored Korn masses did enough homework to take something away from the experience...

I have to admit, from a recording perspective, this was actually a good match. Newsted's not exactly god on the bass, but he's a damn solid performer, and he seems to very clearly comprehend the aesthetic Voivod were gunning for this time around. And the importance of that solidarity cannot be understated, because the eponymous album was a very different experience for the long-term fan, and likely confusing to anyone new who checked out the band and then went through their catalog in reverse. This was once again a 'stripped' or dumbed down Voivod, but not in the same sense as Negatron. Where that 1995-1998 phase of the band adopted industrial and groove metal tendencies, this sees the resurfacing of the bands oldest influences, punk and traditional metal. In particular, a lot of the riff patterns seem like burlier, beefed up NWOBHM songs circa Venom and Motörhead dowsed in Piggy's unique, dystopian dissonance and Snakes harder proto-punk inflection. There's still an almost mechanical, alien nature to the music, but even the lyrics here have been rendered down to a more personal and sociopolitical platform than the xenorobotic wasteland and nuclear astrophysics of the past.

Understandably, this was not a welcome change to many of the band's remaining fans who wanted to hear Nothingface 2.0 or Killing Technology II: The James Cameron Director's Cut, and it didn't get a very fair shake in my opinion. But I have to admit I quite enjoyed this, if taken for what it actually was. There is still subtlety coursing through the album, like the occasional wailing melody ("Blame Us") or trippy psychedelic echoes ("The Multiverse", "Divine Sun"), but for the most part it's bold, knock-down chords and riffs with a great, organic bass tone lighter on distortion than what Eric Forrest was bringing to the table. Sure, the guitar progressions are incredibly simple, but still dynamic and powerful, and I like for once that the band did some soul searching, and gave us a closer glimpse of their worldview rather than...perspectives of other worlds that don't yet exist. The drums are settled into a standard rock climate, and the guitars pretty clean, but Newsted and high profile engineer Brian Joseph Dobbs were quite successful in producing this polished incarnation of the band, and certainly this selection of songs doesn't suffer from the treatment.

There are plenty of straight spaceway/raceway rockers here like "Gasmask Revival" and "Reactor", but I found myself drawn far more to the steadier, lurching tracks that took their sweet time with me, like "I Don't Wanna Wake Up" which translates from this airy, acoustic rock into a dissonant gargoyle groove with a few punkish permutations; or "Invisible Planet" and its brazen, driving walls of chords and the great, contrasted riffs in its bridge. "Real Again?" and "Rebel Robot" also feature some damn interesting spins on the classic Voivod formula riffing, the chorus in the former has this bluesy, post-Motörhead groove that I dig to this day. There are a few generic, predictable riff sequences peppered throughout, but in total I found this to be a solid enough track list.

As a space cadet of the nth degree, I can't really fault anyone who was desirous of a return towards the more ambitious Voivod of the late 80s, but sometimes we've just got to judge something for how it sounds, and not what we so lusted for. Bearing that in mind, I think Voivod was about as good as it could be in the circumstances. Accessible without being 'accessible', well produced and packing a lot of punch for those that don't mind some dust in their coffee. The album might feel more like an exploration of Earth's dry deserts than the lunar dunes, but it's great for road trips and general reflection. The followup Katorz definitely takes a few of the ideas here to their fullest, and proves a better album, but regardless, I don't plan on forgetting this anytime soon.