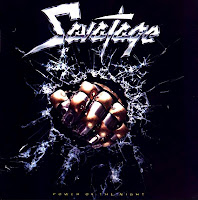 Power of the Night was clearly cognizant of its stature as the first of Savatage's major label efforts, and I think it was little surprise that the band pursued a more accessible countenance than Sirens; but honestly, apart from the huge leap in production values here, the vastly cleaner mix, this is not in fact a stylistic departure from its predecessors. Less gloomy and grim than The Dungeons are Calling EP? Sure, but I don't feel that the band had abandoned its atmospheric principles here. In fact the use of synthesizers and horror/sex themes throughout the sophomore seem to implicate something far more than the usual Mötley Crüe or Dokken associations that were pretty hot at the time, and I for one still enjoy this album despite a few of the laugh out loud lyrics.

Some accused this album very early on of being a 'sellout' which veered a little too closely to the more mainstream hard rock sounds of its day, but I find the notion to lack some credibility, since there were already some similar riffing patterns on the older releases, not to mention the cheesy sex lyrics. Of course, Power of the Night seems rather obsessed with the subject, with the pole-dancing Zeppelin-esque rock of "Hard for Love" with its melodic backing chorus vocals; or the smutty speed metal of "Skull Session", or the corpse-copulating grooves of "Necrophilia", but what do all three of these songs have in common? They're actually pretty goddamn catchy, as much as I might cringe to admit it (in the case of "Hard for Love") when I hear a line like 'I like when we move faster/that's why I'm gonna blast ya!'. And it's not like there aren't a handful of the more 'serious' songs here which have similarly goofy lyrics. 'Raise the fist of the metal child', indeed. Despite the estimable camp, though, Power of the Night seems pretty heartfelt, a misty, midnight street alternative to Sirens' claustrophobic sewer catacombs.

Thanks to the crisp mix, Criss Oliva's guitars absolutely smolder here through both the rhythm licks and the incendiary leads, both of which seem to have developed quite nicely from the earlier records. Guitar tone in general is far easier to follow than the clunkier production of Sirens, and where the grooves merge with Jon's keyboards in pieces like "Unusual", the album is genuinely creepy, or at least it seemed that way in the mid 80s. Collins' bass lines are more standout here, and 'Doc's' drums also delivered in a better ratio to the vocals and rhythm guitars, but the brothers Oliva are still the champions here, whether they're lashing out the dirty stripper-pole grooves in "Stuck On You" or the street fighting overtures of "Warriors". Influences run the gamut from Queen (intro to "Warriors") to Judas Priest ("Washed Out"), and each of the tunes has a readily defined, distinct chorus sequence which separates it from the rest. You also get an early incarnation of the band's 'rock opera' here: "In the Dream"; once more smacking of Queen, and my least favorite on this album, but certainly a premonition for much of the material on Gutter Ballet or Streets.

All told, I still find the album pretty irresistible thanks to the songwriting, production, and perhaps most importantly, the guitar playing. It's as sincere as it looks, a metal gauntlet thrust through a sheet of glass beneath a chrome-tinted logo. The riffing in tunes like "Power of the Night" or "Unusual" is unforgettable, and I can recall weeks of going through these old Savatage records and learning the individual licks, so enamored was I to Criss' sense of flare and style. This was one of Max Norman's earlier metal records, along with the work he was doing with Japan's Loudness, and he really brought the group out of the Dark Ages so you could really appreciate their ample wizardry. I can understand how a few fans might have found this dry, or less inspired than The Dungeons Are Calling, but if you don't mind a little mix of 70s and 80s hard rock influence in your bowl of metal flakes, and a few amusing, dated lyrical passages, there's no reason not to join in the fun. Not their best, perhaps, but I'd easily take this over anything else they've released in the past 20 years and change.