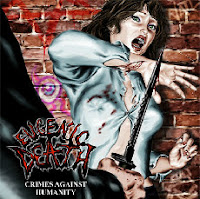 One of the key ingredients I'm constantly seeking in newer thrash, whether it's motivated through sheer nostalgia, or a more progressive and modern spin on the genre, is that the band is actually taking itself seriously, and by extension, taking me, the listener, seriously. Which is in itself fun. I've grown exhausted with the lack of creativity in so many younger bands, clowning around like this is supposed to be the 'Don Knotts' of metal. I want riffs, I want action, I want lyrics about things that don't involve using the genre's name repeatedly in cheap self-promotion, and I want to bang my motherfucking head like I'm not in on some twist of tween irony. While I can't promise that Eugenic Death has the most unique musical perspective in this field, they DO take themselves pretty seriously, and it translates to some angry, old school thrash. Thank fuck.

The North Carolina quartet will probably be most recognized for their vocalist, who uses a very gruff and deep timbre which is constantly bordering on a growl without going over the edge. Bands like Demolition Hammer and Rigor Mortis were known to employ such a tactic, but here the patterns are more rugged and percussive, almost like Max Cavalera circa 1989-1991 without the accent, or the front men of a couple local New England bands we used to have in the late 80s (Formicide, Subjugator, etc). I can't say that I was the biggest fan of this style, since the rigorous barking rarely breeds any character or inherent melody, but at least you get used to it after about 3-4 tracks, and to be fair, the man sounds like a thug, and there is nothing wrong with that on an album like this. Far more of a highlight for me were the guitars, which cycle through blistering speed/thrash licks and mid-paced, moshing breakouts. All pretty West Coast, with a clear lineage from bands like Slayer, Exodus and Forbidden, but there were riffs here that also brought to mind Australians Mortal Sin in their 80s prime, perhaps even a little Anthrax or Nasty Savage. Even better, these guys have a phenomenal guitarist in terms of his leads, each of them was engaging and added to its respective track.

As for the production on Crimes Against Humanity, it's admittedly pretty average, but it gets the job done. We're not talking Warbringer or Evile levels of polish here, but the rhythm guitars are crisp and clear enough, the drums charge along mercilessly, the bass is loud and supportive, and the vocals are a knuckle sandwich constantly cocking back to strike you on the nose. During the solos, I sometimes felt that the rhythm guitar accompaniment was a little skimpy; and there's not an incredibly level of variation in the riff patterns, but I felt like they were well structured enough to honor their influences without sounding too much like specific knockoffs. There are only seven tracks, but they're substantial enough to duke it out for around 37 minutes. At any rate, after the smoke cleared, and my neck stopped twitching, I would be remiss to not admit that I had a good enough time listening through Eugenic Death's debut. It's nothing amazing, and it doesn't set out to be, just an honest pile of thrashing that will hold some appeal to other skilled 80s style thrashers of late, like Havok, Merciless Death and Bonded by Blood. Protective headgear optional.