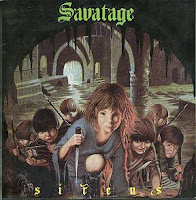 As often as my opinions have fluctuated beyond their 1989 opus Gutter Ballet, Savatage was once one of the most rock steady, reliable heavy metal groups of the Southern USA; the darker aesthetics they brought to hard rock fundamentals peeling off into an ambitious development that many bands would simply have been too fearful to attempt. I felt that the band was always under some sort of pressure, perhaps due to their own expectations, more likely from their major label (Atlantic), but the fact that they nonetheless managed to tough it out, remaining in the spotlight for such a long time without even packing tours or generating immense sales of their records, is a testament to the devotion of the Floridians.

Sirens was, of course, from a more innocent time, before the Oliva brothers evolved the band's course into its rock opera state, and yet there are still threads of almost theatrical elegance to how they crafted a number of the songs. After changing names form the far less distinct Avatar, they had begun to move in a moodier, dark direction that, like it's US, German and British counterparts, strafed the line between the arena mentality of hard rockin' sex thug anthems and the more aggressive speed and thrash that was only then beginning to emerge from a handful of scenes. Sirens still has a lot of natural groove to it, due to the writing style and performance of guitarist Criss Oliva, who to me always resembled a 'poor mans Randy Rhodes', but would inevitably become one of my favorite players of this precious period, due to his coordination of pure, molten riffing patterns, flashy but memorable licks and the escapism of his leads.

This debut wasn't the heaviest or most complex of their outlets. It didn't possess that same, vicious songwriting economy of a Show No Mercy or Kill 'Em All, yet it's still a hard-hitting classic, one of their career best, and despite the chunkiness of its production, it hasn't lost much luster through the intermittent decades. Like the ancient sewers and waterways that the elfin rogue children of its cover travel through, Sirens is a claustrophobic, cavernous sounding record, with a heavily processed guitar tone that mixes with the vocal reverb and other effects to create this echoing paean to evil. As a contrast, Steve 'Doc' Wacholz drums are mixed humbly, snapping and crashing along without that same level of vaulted atmosphere. The bass, performed here by an earlier member (Keith Collins) wasn't much of a presence itself, gently plugging along to support Oliva's churning rhythms, woozy octave chord slides, and gloomy clean tones.

Even more impressive than his brother, though, was Jon Oliva's barking, enraged inflection, one of the most unique in all heavy/power metal of the 80s, and a trait I've long considered a make it/break it factor in terms of my interest in their output. The man's style just exudes sinister intentions, like the villain in any classic play or horror film. The wolf man, stalking the wood behind you. Jack the Ripper, polishing his instruments while he waits for an unsuspecting lady of the night. MacBeth, eyes burning with the blood of his revenge. While some might have faulted him for lacking the range of a Halford, Dickinson or Ronny James Dio, for me he provided ample proof that the best singers are not always those with the 'prettiest' or widest capabilities, but those that make the best of what they've got. Jon can do delicate, and he can emit a shriek or two when it suits him, but it's this rabid, mad dog mid-range that, more than anything, made me such a fan.

Not all of Sirens aged well for me. In particular, the smutty "Twisted Little Sister" lacks an interesting hook, and the vocals and lyrics are beyond cheesy unless you really like your dim lit 80s S&M metal for the sake of burning its own candle wax. I also feel that the front half of the album is a cut above the rest. Deeper in, you've got "Living for the Night" and "Out on the Streets", solid enough tunes, but nowhere near as strong as something like "Sirens" itself, with its hypnotic, eerie clean guitars and bells that transition into a filthy dose of primal power metal that captured the threatening mythology of its subject matter. "Holocaust" and "On the Run" had a lot of that dirty, beloved hard rock groove, while "Rage" is borne more on Motörhead speed metal fix with some of Jon's higher pitched howls and screams. In general, though, I could listen today to almost the entire album with the exception of "Twisted..." and the later added bonus tracks, and still get the same thrills as I did in Junior High.

I wouldn't hold the production up alongside their finest works (like Hall of the Mountain King), since it seems mildly uneven and the rhythm section leaves more of a footnote than an impression, but as a debut for the Oliva brothers, you can't really go wrong here. In terms of complexity, it's not much more involved than Iron Maiden or the other serious entries in the NWOBHM field, but the band knew how to throw down a chorus, provide interesting verse riffing, and there are plenty of little licks to pick out there, thanks to Criss Oliva's ceaseless unrest for the mundane patterns a lot of also-ran metal acts were producing. Ultimately, while it's no American masterpiece, it's a damn good debut which an appeal that transcends generations, and I'd count at least the title track as one of their top 10-15 songs ever written.