Execration - The Acceptance of Zero Existence (2012) 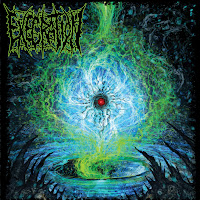 Colorado chaosmongers Execration cock their fists back here, and give the listener about a minute to simmer in ambient reflection before those knuckles come flying across the confined space from speaker to ear and then continuously club and break every joint and muscle in your face, before proceeding down your neck to the rest of your joints and appendages. The Acceptance of Zero Existence, their sophomore album through Comatose Music, is not a paragon of subtlety or highly memorable composition, but there is no shortage to their promise of pure punishment, and the conviction with which they beat on their instruments is admirable in of itself, even if you won't find yourself whistling their tunes on your morning trek to the commuter rail.

That said, there is a certain level of dynamic range to this album which prevents it from subsisting on the monotony that often permeates such a brutal, blast-driven record. Lots of grooves and chugs cavorting about its nihilistic landscape. Acrobatic flights of tremolo picked guitars that create the claustrophobic sensation that you are being curb stomped by giant insects. I'd also commend the bassist, who is performing constant loops and lines that very often swerve around or step away from the central guitar progressions. Rhythmically, there are a lot of the usual influences to the Execration sound. Morbid Angel's vivacious acceleration and lunatic riffing patterns, Cryptopsy's savage precision, and Deicide's stubborn intensity, though the slamming breakdowns in pieces like "Serpentine Changeling" ring of more contemporary US brutality, and the growls are deeper and more caustic than the front men of the aforementioned legends. Where The Acceptance of Zero Existence functions most for me is in its production, the low end of the guitars churning along in rabid old school ferocity while the double bass thuds out a syncopation, and the bass wanders off into the void.

While technically efficient to exert this level of energy nonstop for nigh on 40 minutes, Execration is a band one will listen to more for its brutality than musicality. Very little melody creeps into the structure of their songs, discounting of course the frivolous and wild patterns that the guitars alternate with the lower end drudge of the grooves. The dense, palm muted chug patterns don't feel particularly distinct in a field of metal trampled on by so many players, and there are points where the record feels pretty muddy and the individual, heavier songs don't do much to distinguish themselves from one another. Then again, they don't burden the effort with tons of needless, noodling indulgence. When they spaz out, they do so meticulously, with every intention of reigning it back in to crush your vertebrae; and they never seem to lose control. I also loved the deep voice over effect they use in "The Stars Will Make Known My Rage", and the spacey effects in the interludes. Dynamically, this isn't quite so engaging as a number of the West Coast acts in the niche like Decrepit Birth, Odious Mortem or Inherit Disease, but nevertheless I'd had fun with the band's furious fisticuffs. Just don't blame me if you run up an emergency room bill upon repeated exposures to this.