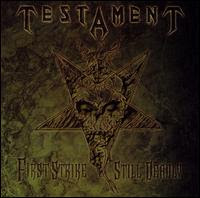 To their credit, Testament was one of the first of the big named thrash acts in the 80s to concoct the idea of an album full of re-recordings, a process that has now been repeated by a fair share of others with such long legacies. In particular, the Germans have excelled at this sort of record, at least Destruction and Holy Moses putting out fantastic tributes to their legacies, but the West Coast US acts have had limited success. First Strike Still Deadly has its moments, but not enough of them to really justify its existence, or recommend it over the original albums from which the songs are drawn. It's not nearly so fugly and awful as that Exodus re-recording of Bonded by Blood with their mediocre, later front man Rob Dukes, but it's no spring chicken.

I mention Exodus partly because one of the highlights of this collection is Steve 'Zetro' Sousa's presence on the final cuts, "Alone in the Dark" and "Reign of Terror". Sousa was actually the original Testament vocalist back when they were known as Legacy, before signing to Atlantic and releasing their debut by that name; so to hear him bury the hatchet and belt out a few numbers for his alma mater is something special indeed, not that they trump the Chuck Billy versions by any means. In fact, I would not have minded the band pulling a few more rabbits out of its hat and just recruiting other friends from Bay Area thrash legends to front the other songs on the compilation. Russ Anderson on "Disciples of the Watch"? Steev Esquivel doing "The Preacher"? Sean Killian on "Into the Pit"? Tom Araya? James Hetfield? Such a lineup could have gone a long way towards increasing the value of First Strike Still Deadly, even if it meant Chuck had to sit out on the sidelines (I'm sure he'd have been smiling along with everyone else). Fans often seem to have a problem with newer singers in established bands (like Dukes) spewing their lackluster inflection over classics, but perhaps a vocal tribute with the core musicians wouldn't be such a shitty idea...

That is not what First Strike Still Deadly is, of course, and for the most part, Billy returns to his role. All of the songs here are taken from the first two albums (with the exception of "Reign of Terror", a tune that had popped up earlier on a single, as well as the Return to the Apocalyptic City EP). Naturally, the major difference here is one of tones and instrumentation. The guitars are presented with a chuggier, modern disposition than the originals, though I can't say they're an improvement, because they seem to lack the same level of resonance and atmosphere as they once did. In fact, the whole of this is surprisingly unpolished, like the band didn't do a whole lot of post-production, and it almost has the feel of a pristine rehearsal room performance. Bass god Steve DiGiorgio performs the bass here, and he adds a few minor runs to the older lines, but never goes overboard; while Skolnick's leads are a little more prominent due to the clarity of the rhythm guitar mix. Overall, the performances are rather spot on, and having Zetro bark out "Alone in the Dark" with his nasally tone is at least entertaining, if not his most vicious and memorable work.

The major problem I have is that these renditions of the tunes, due to their dryer production, lack almost all of the ominous magic that the originals once possessed once you'd put the tape or vinyl of The Legacy of The New Order into your deck or player for the first hundred times. The drums feel too clean, and while the rhythm guitars are fully on point, they seem almost too far in the forefront, and I dare say it, too punchy. I think the vocals themselves probably benefit the most from this treatment, since Billy adds some extra growls to classics like "Into the Pit", but even then, they're just a retread of his original lines. Hell, I would love to see the band perform this tightly at a live gig, but for my own listening preferences there is just no shot in hell that I'm going to put these on over the earlier albums, and aside from throwing a couple of bucks at them, it doesn't serve much purpose in my world, though it's far from the worst example of this sort of collection.