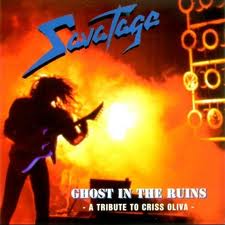 I can't be the only person that teared up a little when he realized there would be, at long last, a full-fledged live album featuring the late Criss Oliva of Savatage in his rightful spot on the lead guitar. The man was a major influence on my own playing from an early age, and to be perfectly blunt with you, the very idea of a Savatage without Criss performing, and without Jon handling vocals, is alien to me. Unnecessary, even. I mean no offense to the revolving door of musicians the band used to fill in the blanks later in their career, but I've just never been able to get too into anything the band released after Gutter Ballet, so I was literally beaming with joy when this arrived in my clutches, and it's a real treat that this sounds as good as it does; one last hurrah with the wizard of the frets.

Ghost in the Ruins is not necessarily a 'proper' live outing, but a collection of cuts compiled from various gigs spanning the years 1987-1990, arguably the band's creative peak in terms of studio output. All of the performances are from here in the States, and it might have been slightly superior if they'd chosen to interject a few European festivals or tours just for variation, but in general the quality of the mix here is intense and vivid enough to carry a listener to those fateful, important years of their evolution. With Chris Caffery's rhythm guitar beneath Oliva's wilder lead tendencies, tunes like "City Beneath the Surface", "Of Rage and War" and "The Dungeons are Calling" sound tremendous. It's utterly fantastic that, even at this more 'rock opera' oriented stage (which would culminate with Streets and the later albums), the band was hammer out wonderful live interpretations of their pure metal roots, merging them into sets alongside the more delicate cuts like "When the Crowds are Gone" or "Gutter Ballet" itself. It's also impressive that, despite these being different gigs, the mastering keeps the varied levels relatively balanced so that it could almost pass for a single set on a single night of magic...

It's true that much of this material is drawn from Hall of the Mountain King and Gutter Ballet, with a few of the earliest tunes for good measure. I wouldn't have minded a few of my favorite numbers from Power of the Night making the selection, but then, that and its successor Fight for the Rock were divisive records, and I might have been alone in the majority for such a sentiment. Regardless, listening to Criss's leads here in "Legions", "24 Hours Ago" and "Hounds" alone would be worth the price of investment in this, and I'd rather experience this perpetually than suffer a family friendly Trans-Siberian Orchestra gig. The vocals have that classic balance of delicate, emotional resonance, grit and screaming, and the crowd response is good and loud without cutting into the instrumentation. Drums, bass, piano, everything is spot fucking on. I could live without the solo track (I rarely care for 80s guitar hero leads outside of the actual song context), and the 'post script' acoustic, but otherwise this is hands down one of the best live records from a classic US metal band of the 80s, whether you have to pay 10 or 20 or 50 dollars to track it down. In fact, even if it's not studio material and nothing new, it was the single most valuable Savatage record beyond 1989.