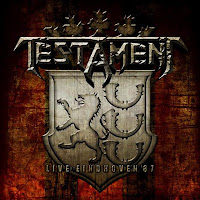 I've got mixed feelings over the Prosthetic Records re-issue of the hard to find Live at Eindhoven EP. On the one hand, this was pretty difficult to find in my neck of the woods growing up, and as a teen Testament worshiper I can recall some teenage frustration at not owning it, and not even knowing anyone in the flesh who did. On the other, it's not at all their best live product. Purists might appreciate it for the time and place in which it originally manifest, and we all know a handful of metal fans who have a mental 'cut off' date in any older band's career, which the antiquity of this might satisfy, but tonally it's not just the top of the crop when you can purchase a more fulfilling record like Live in London that also has the original lineup and a lot of classic songs present.

This was recorded at the band's 1987 Dynamo Open Air set in Holland, proof that even very early in their career, the Californians were being pushed to the major label thrash elite, and generating buzz everywhere. It was originally released only a few months after The Legacy, and thus all the content is taken from that one album; however, the 2009 reissue actually features the full set with about 20 minutes more material than the old EP with just 5 songs. In addition to "Over the Wall", "Burnt Offerings", "Do Or Die", "Apocalyptic City" and the rare "Reign of Terror" you're also getting "The Haunting", "C.O.T.L.O.D.", "First Strike is Deadly", and Alex Skolnick shredding track (admittedly useless) and an early bird version of "Disciples of the Watch". Sadly there's no "Alone in the Dark", a personal favorite, but with the limited set time at a large festival, you do what you can, and from the sounds of it, Testament had a strong reaction from the Europeans, many of whom must have been entirely new to the band at this time.

For whatever reason, though, the levels here are far from perfect. Might have just been the wind, or some natural sound warping through the mixing board or amplifiers, but the guitars here often feel a bit clunky, with minor errors occurring throughout the set. A few, like "Disciples of the Watch" sound fairly strong for such an unseasoned band. Billy works up the crowd angrily, and I like the levels most of the band is set at, but there are points where drums and vocals actually seem to dip in volume and then swell back into perception, and it's just not such a consistent experience. The leads probably sound sloppier than Skolnick would have liked, and sometimes the rhythm guitars feel too boxy and echoed. That said, a few of the 'charge' riffs in the set come off just as impactful as they would anywhere else, and those into the earlier thrash live recordings might actually excuse the flaws for its innocence and authenticity. As for the new cover art, seems like something somewhat cheap and digital slapped together, and Prosthetic Records, a label known mostly for its melodic death and metalcore, seems a strange home for it. In the end, it's a noble cause to get this thing back out into the hands of fans who never had a chance to buy it the first time (raising my hand here), but not exactly worth the wait after we'd already gotten steamrolled (in a good way) by Live in London.