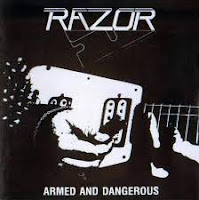 Though it's far from a representation of Razor at their best, I have a particular sentimental attachment to the Armed and Dangerous EP which I've never been able to shake off. For one, the cover art to this record is absolutely iconic, my favorite of their entire catalog. I managed to land a t-shirt of this some time ago (most likely a boot), and I've been wearing it sever since. I also bought the guitar, or at least a damn similar one. Plus who couldn't love the image of a razorblade being used as a proxy for a proper guitar pick? Fortunately, the actual sound of the seven songs here is just as dirty as the record looks, all spikes and cruelty and driving, molten metal with no apologies and no subtlety.

Granted, five of the seven tunes were also recorded for the debut, Executioner's Song, and those remain my preferred versions, since they've got far more of an atmosphere running than the rather dry mix given to what is essentially a glorified second demo. The guitars are on this are crisp and punchy, with a good bass tone for support and some poppy, snappy drums, but they don't possess the same level of resonance that fried their later brethren into my brain forever. Also, the vocals in cuts like "Killer Instinct" sound pretty sloppy when they vault into the sustained notes and screams, and overall there's a modicum of clutter to the performance which doesn't feel as fast, refreshing and violent as later incarnations. Of the two tracks which were unique to this at the time, "Armed and Dangerous" itself is the better, with some solid mid-paced mute guitars evoking melody, and lots of dynamic rush like a snare cadence and some flanged axe lines that help set up the thrust of the central verses. The chorus itself is not all that intense, however, and the best songs are "Take This Torch", "Fast and Loud", "Ball and Chain" etc which all appear again with more pep.

Those who first got into the later, more pavement chewing and chainsaw soaked speed/thrash records might also be a fraction turned off by the Canadians' earlier style, which was borne more of pure trad/speed metal circa Venom, Motörhead, and the darker side of Judas Priest. This was Razor at its most base. Simple. Unformed. For 1984, Dave Carlo was no slouch on his guitar, but the riffing has nowhere near the same level of intensity and velocity that many recognize on a Violent Restitution or Shotgun Justice. It's really just the setup for Executioner's Song, an album I happen to love a great deal, and one of the finest of that early Canadian scene that brought us Metal on Metal, Heavy Metal Maniacs, Metal Inquisition, or War and Pain. The vocals here carry straight through to the debut full-length, with the less interesting songs abandoned, and a better overall mix of timeless tension, steel and spikes. Armed and Dangerous was an adequate introduction to the band's no prisoners, leather and lust aesthetic, and I've got some obvious nostalgia for it, but its lasting value was substantially curtailed by the following album.